In the last two years, Judah has grown as a person and gained amazing confidence and leadership skills. I think these two pictures (the day we dropped him off and the day we picked him up) say it all.

University has a been a wonderful transition for him. More independence, more responsibility, but with a roof over his head and hot meals (that he paid for by working his way through university).

And finally, last weekend, it was time to retrieve our son. So we came up with a plan. Plan A did not include a hotel room and overnight stay.

Initially, we were just going to get up early (like leave at 4 am early) to attend Judah’s graduation on Saturday. Then he told us he needed to be packed up and signed out of his dorm Friday night. So I decided to book a hotel. Except that every single hotel room in Ellensburg was booked…so we ended up booking a hotel 40 minutes away. And we had to book two rooms since the hotels don’t look kindly on five adults and three kids sharing a single hotel room. This is Hayley. While she’s been appearing on the blog sporadically for the last couple of years, only recently have people been asking who she is. She is a good friend of all my teens.  But we prefer to call her, That Grown-Up Lady on the Blog. Happily, Jared was able to join us for our dinner at Pizza Hut… Unfortunately, we were unable to take all the kids. Fortunately, the ones who stayed behind got to play with friends and have forbidden sleepovers. So I think it all worked out.

For some reason, I found it a little bit sad to see all of Judah’s things packed up and to realize this part of his life is over. Enoch? He was just happy we had a box of cookies. This is a completely candid shot of Kalina explaining that the hotel only had decaf coffee. I think her expression says it all… After our early morning, caffeine-free breakfast, we made the 40-minute drive back to Central Washington University. And then it was time for the commencement ceremony. Can I make a confession? I have never looked forward to a commencement as much as I did this one…why? Because Judah was chosen as the student speaker.

[I’ve been holding off on this post a bit, waiting for CWU to post the video of Judah’s speech online…but apparently, I am more eager to share it then they are. Rest assured, I will post it when it is available.] 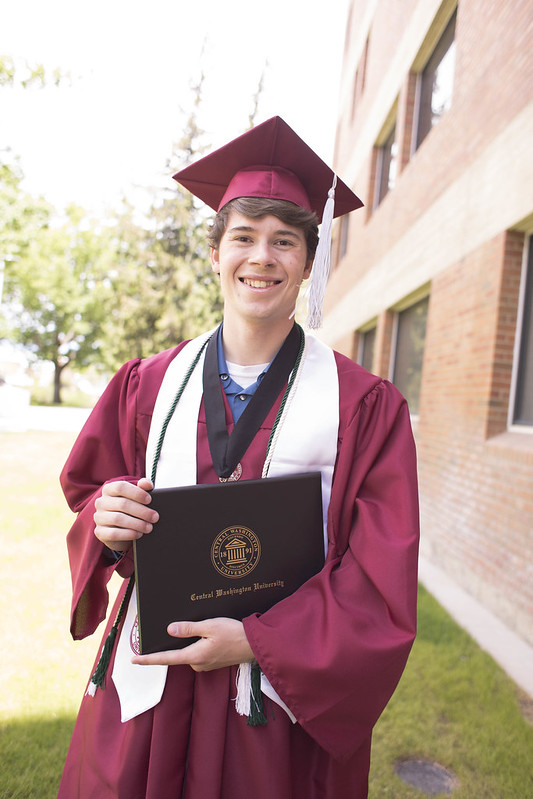 Judah’s speech nearly brought me to tears. Mainly, because I have shed a few tears parenting my children. Having bad days where I felt I was doing nothing, nothing right.

The kids were fighting.

The kids refused to do their chores.

I was failing them.

I was failing miserably at homeschooling.

I didn’t make the kids “do enough” so I’d stay up late making new schedules, new lists, new priorities. I’d go to bed tired but determined…only to wake up in the morning and have my new plans and enthusiasm derailed by seven am by a sick baby.

Training for the Appalachian Trail