You probably remember back in March when I tried out Kodak’s PIXPRO SP1 Action Cam. We made a video and won the Mom’s MVP Video Challenge. You might also remember were having so much fun with it we lost our first camera in the lake. Oops. Apparently Kodak has forgiven me for being reckless because they sent me their brand new PIXPRO SP360 camera to test. 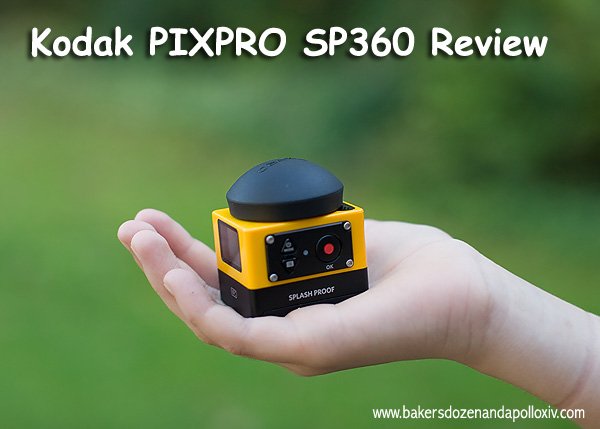 This video camera is unlike anything I’ve seen or used before. The Kodak PIXPRO SP360 takes a 360 degree view video. You aren’t limited to what is in front of the camera. The curved lens means is captures everything.

I’ll admit there is a bit of a learning curve when using this camera. It isn’t something you take right out the box and start making cool videos with. This camera has no LCD screen and needs to run off of a smart phone or tablet. I needed to download the app to my iPhone, then use the built in wifi to run the camera. After a bit of playing and trial and error, we were using it at the park, the beach, the aquatic center, etc.

The PIXPRO SP360 isn’t waterproof (Kodak says it’s splash proof) but that doesn’t mean you are limited to shooting on dry land. The PIXPRO SP360 comes with a box of cool accessories,  including waterproof casing. If you can imagine somewhere to put the camera, there is probably an accessory to help you do it.

* the ability to move the view after you’ve shot the footage, eliminating the need for multiple cameras (the first video below explains this)

* needs to run off a smart phone or tablet

This video demonstrates how you can use the PIXPRO software to change your view after you have taken the footage. You really need to watch this to see the camera’s awesomeness.

And here are two more fun videos we’ve made with our SP360.

At the aquatic center:

While this camera is slightly more difficult to use than the PIXPRO SP1  the advantages to multiple views and not missing any action outweigh the cons to me. I consider the Kodak SP360 a little more “high adventure” than the SP1.

If you haven’t already check out our YouTube channel, you may want to subscribe so you don’t miss out on any of our fun videos.