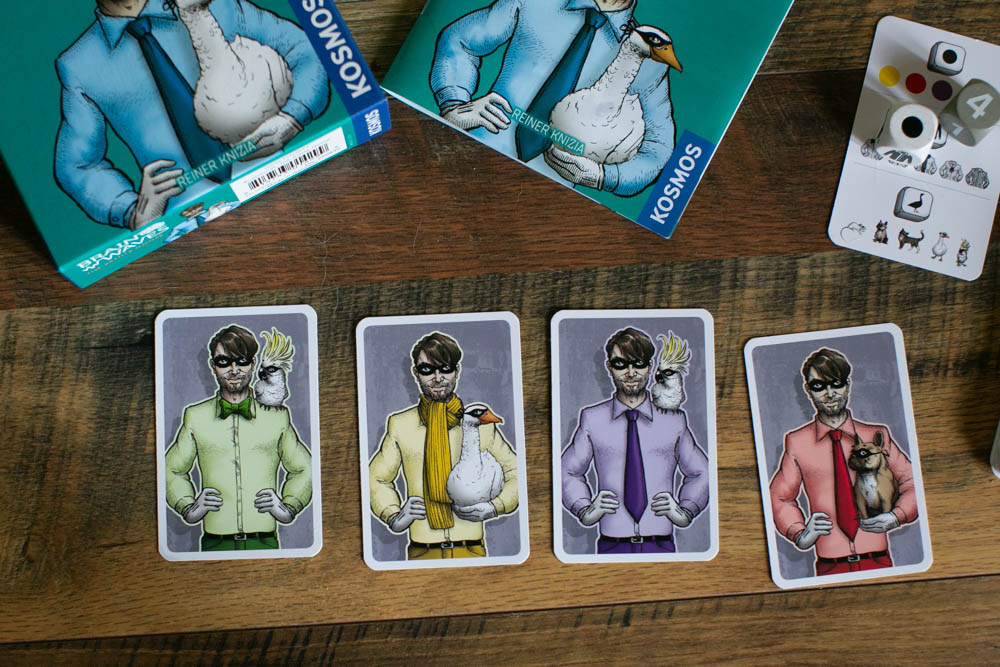 This product was sent to me by Timberdoodle.com for review purposes. I have received no compensation for this post.

All Memory Games Are Basically the Same, Right?

I have to admit, when I sat down to play this game for the first time with a few of my adult children and Apollo, I had no idea what I was in for. We were playing the “easy” level with just three “burglars”. All we had to do was identify which one was the correct burglar. I have read a few books about memory and have a few tricks up my sleeve for remembering objects and lists, so this should be a breeze, right?

Forget the endless games of memory you played as a kid, in this game the burglar is changing each turn and it takes some super brain power to keep up.

This Game Exercises Three Brain Functions While You Play

According to the Timberdoodle website: “The science behind this game is fascinating. German Neuroscientists investigated The Astute Goose as part of a scientific study to see which brain functions are used or required to play. The Astute Goose was found to exercise three brain functions: fluid intelligence, working memory, and long-term memory. In The Astute Goose, your student must identify a burglar hiding in a crowd. What color and style were his clothes, and what animal is he pictured with? If the player can accurately remember the burglar, they claim the card as a reward. Whoever correctly identifies the most burglars wins! Unlike other static memory games, the constant mental updates needed to win provide a memory-building challenge. The Astute Goose requires concentration and attention to succeed. Still, the game takes just seconds to learn, and players can easily adjust the difficulty.“

How to Play The Astute Goose

To play The Astute Goose you first choose your difficulty level. I highly suggest you begin with the easiest level and go from there.

To set up the game, the appropriate number of cards is laid out (from 3-6). All players get a chance to look at the cards before they are placed face down. You need to memorize the features and attributes of each burglar. You need to pay close attention to 1) the color of their shirt 2) their tie or scarf and 3) what animal they have.

Player one rolls the dice. One has the number of the burglar the player needs to remember and the other has the attribute (animal, color, or accessory) the player needs to remember. If the player guesses correctly, then he keeps the card. If his guess is wrong, each other player, in turn, has a chance to guess. Whoever guesses correctly keeps the card and a new burglar card is placed. Everyone has a chance to memorize the card before it is turned over. The player with the most cards/burglars at the end, wins.

This is much more challenging than traditional memory because there are so many (changing) factors to remember. This is a game that takes concentration and focus and isn’t as fast paced as Taco Cat Goat Cheese Pizza or a funny as Cards Against Humanity Family Version but we really enjoyed playing it.

The Astute Goose is designed to be played by 1-5 players (yes, you can play it yourself to train your brain and get the upper hand on your kids for next time you play).

You lay out the cards face up (depending on the difficulty you choose). Everyone has a chance to memorize the cards.

Player one rolls the dice (one for the number and one for the attribute) and guesses which card it is. After his guess, he looks. If he is correct, he keeps the card, if he is wrong, the next player gets to guess. This is done until either someone guesses it or each player has had a chance to guess. If a player guesses correctly, he keeps the card and replaces it with a new card that everyone has a chance to guess.

This sequence is repeated for each player. The player with the most burglar cards at the end wins.

A game of The Astute Goose takes about 15 minutes to play.

The Astute Goose is recommended for ages 8 and up. I am not sure how an 8-year-old would do, but 11-year-old Apollo enjoyed playing with us.

I give this game 4 out of 5 stars. It is fun and challenges, but definitely requires some brainpower, which some people may find off-putting.

The Astute Goose can be purchased from Timberdoodle by itself but is also included in the 4th Grade Curriculum Kit.

For more of our favorite games check out my post, The Best Family Games for Moms Who Hate Board Games.