Can Surgery Help You Sleep? I Sincerely Hope So 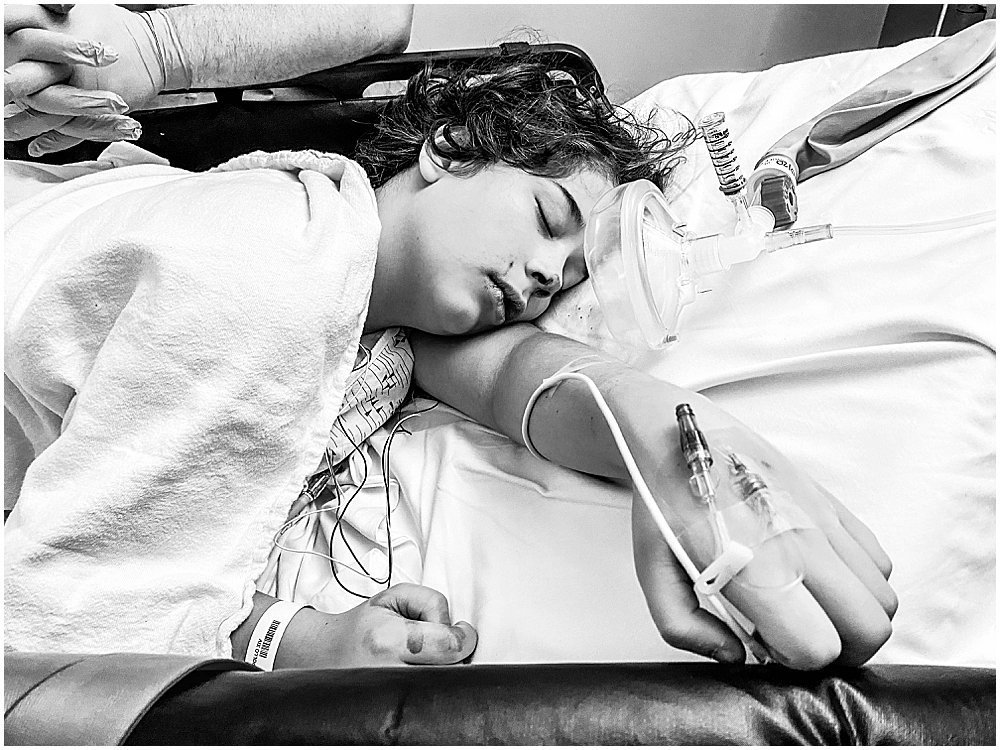 Septoplasty to Correct a Deviated Septum in a Child

Earlier this year Chuck and I began to notice that Apollo was more tired than usual. He was still tired when he woke up in the morning and was often too tired to play with friends. If he had an active day playing, it would take two or three days for him to feel normal again. Now, I am no stranger to fatigue, but none of this seemed normal for a ten-year-old boy.

I took Apollo to see his ENT down at Seattle Children’s Hospital and there he was diagnosed with a severely deviated septum. The ENT said, “usually a deviated septum is bent in the middle, but Apollo’s is more like an accordion”.

Normally a septoplasty to correct a deviated septum wouldn’t be done on a child. Doctors prefer to wait until a child is fully grown, otherwise, they may just end up with a deviated septum all over again. For Apollo though, the rules are a bit different.

Over the past year and a half Apollo has grown more in both height and weight than he ever has before. This growth is probably what caused the deviated septum as his body gears up for the hard work of puberty. He has never been a good sleeper, but both he and I were at the end of our ropes.

Apollo’s ENT recommended septoplasty because Apollo still has sleep issues and the deviated septum is no doubt contributing to his current sleep apnea.

Yet Another Sleep Study

Apollo had his fourth sleep study earlier this year. He did great…right up until it was time to put the nasal cannula in his nose. It was a struggle from there on out. We both survived the night, somehow, and went home after very little sleep…

The sleep study confirmed both loud snoring and sleep apnea. Though, he was so completely restless and woke so many times it’s a wonder they collected any data.

Septoplasty and Endoscopy to Check his Upper Airway

The sleep apnea was the final piece of the puzzle to confirm surgery is the right choice for Apollo. He is also on the list for a CPAP machine, but after months, still hasn’t recieved one. He had an appointment for a fitting and the morning of the appointment I got a call saying our insurance was no longer working with the supply company…and so we wait.

Endoscopy of the Upper Airway

Since Apollo’s ENT was going to have him under general anesthetic for surgery he opted to do an endoscopy of his upper airway as well. Apollo was born with a double aortic arch that crushed his trachea, causing it to be c-shaped instead of round. This caused many breathing issues for Apollo during his baby and toddler years. One reason we had the g-tube placed was to try to grow his trachea as much as we could before it hardened (tracheas start out soft like cartilage and firm up as we grow).

During the pre-op, as we discussed the endoscopy, his ENT actually said, “I hope I find something”. Seeing such a significant drop in Apollo’s energy is worrisome to us and his doctors.

Once the endoscopy was done and before he started the septoplasty Apollo’s doctor came out of the OR to talk to us. He said Apollo’s upper airway looks great! This feels like a miracle to us after years of struggling with breathing. This was the best news we could possibly hear and totally unexpected.

Then the ENT said, “I found something else though…do you know what turbinates are?”

Neither Chuck nor I had heard of turbinates and quite frankly were surprised there was upper airway anatomy we were unaware of.

Turbinates are bony structures inside the nose, covered with soft tissue. They regulate airflow and warm and humidify the air you inhale. When you have a “stuffed up nose” is is the turbinates which are swollen clogging your nasal passages.

Apollo’s ENT said his turbinates were abnormally large and he wanted permission to do a turbinate reduction in a procedure called a turbinectomy. The doctor said he wanted to trim down the lower turbinates on both sides. This got an easy yes from both Chuck and me. The entire reason we were there was to improve his breathing so he can sleep. There isn’t much of a point in correcting the deviated septum if we just leave the turbinates to obstruct his breathing.

The entire surgery took just under three hours. We warned the hospital staff ahead of time that he always has a hard time waking up from anesthesia.

“Oh, it’s totally normal for kids to wake up grumpy after a procedure”.

Chuck and I exchanged a knowing glance. They always under estimate his struggles when waking up.

And they always regret it.

The doctor came out once he finished the septoplasty with turbinectomy. He told us Apollo did great and had very minimal bleeding. “His airway should be clear now and I am very optimistic that this is going to take care of the sleep apnea and allow him to breathe and hopefully sleep better at night”.

Yes, my friends, doctors have been optimistic before, but after eleven years of disrupted sleep, I will take any sliver of optimism the doctor is willing to give me.

And the added, “By the way…Apollo XIV’s name was the talk of the operating room. Everyone was talking about how cool it was and debating whether or not he was named after a space mission”.

Apollo was asleep when I was led back to the recovery room. I asked the nurse if he had been sleeping the entire time and he said, “He’s sleeping now, but he was awake a bit ago. He got so wild I had to give him medicine to calm him down”.

I managed to snap two photos with my phone before Apollo was away and yelling. He cried and yelled and said it was “the worst day of my life”. He kept saying, “take it off, taking it off” and pulling at his nose. The swelling and stitches inside had him convinced something was in or on his nose. He asked me to help him “escape” and when I said I couldn’t, he said, “YES YOU CAN. No one is here. We can escape now and no one will know”.

For those of you who are wondering…surgery and medical procedures get both easier and harder as Apollo grows. On one hand, we can explain things to him. He understands why he can’t eat before surgery. On the other hand, he is old enough to worry ahead of time and dread procedures.

For those who have lost count, this is Apollo’s 8th surgery.

Statistically it does if they are enlarged. We know these were obstructing his breathing, so it is reasonable to assume them will help with his sleep apnea. He is six days out from surgery now and still swollen, so we are waiting to see how his sleep is in the future.

Surprisingly, this hasn’t been very painful for Apollo. The first three days he complained a lot of his nose being “uncomforable”. Imagine the worst stuffy nose you’ve ever had and double that. There was very little relief from that feelinga and he had to sleep with his head raised. This meant, him in the recliner and me on the (too-short) couch.

Fingers crossed that this is the solution to finally get Apollo sleeping.