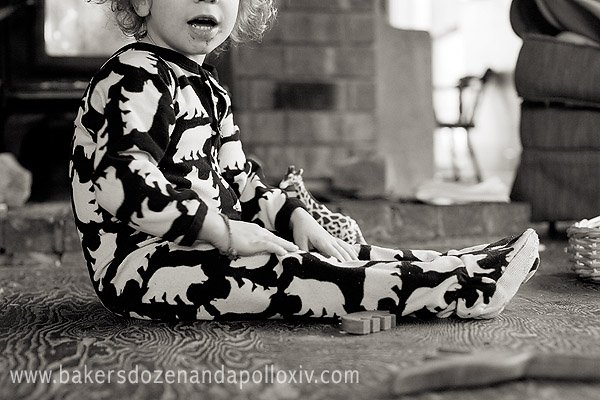 First he played nicely with his toys…

His little animals chatting about light sabers and coffee… 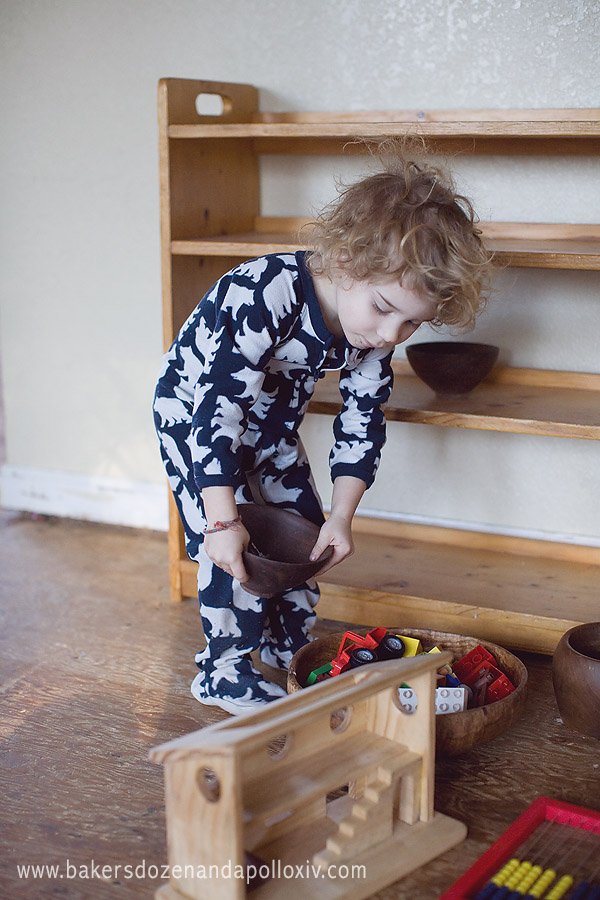 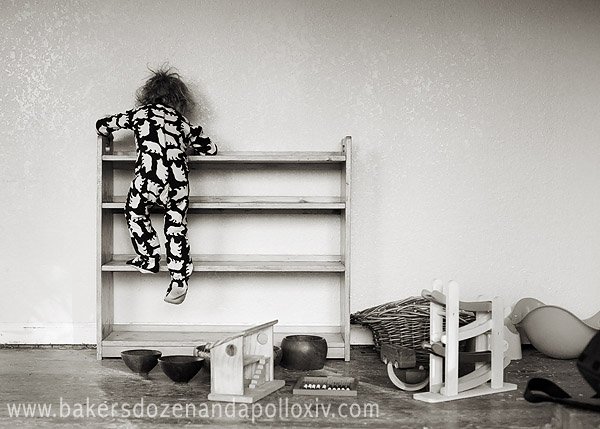 Until he realized his ultimate goal: conquering the shelf itself.

I received an interesting question from a blog reader a while back. She asked if Apollo, because he’s  the youngest of fourteen, watches more TV and movies than the other children did at this age. The question (while innocent enough) made me chuckle. The truth is, the other kids watch more movies because of Apollo. Let me explain.

Back when Apollo had his first heart surgery he was 20 months old. Recovery was rough. We were sent home on day three with just a baby-sized dose Vicoden…and he was in pain all the time. We borrowed a Winnie the Pooh movie from a friend, and that was more or less Apollo’s introduction to movies. He watched that movie two or three times a day in the first weeks post surgery. Chuck or I or one of the older children would sit and rock him in our glider for hours…and during the day I often had to have the younger children watching with me (rather than running around unsupervised upstairs). They didn’t watch every day, but more frequently than I liked.

After the surgery Apollo still couldn’t eat well, he was in pain and barely sleeping. Six weeks later he was back in the hospital and one week after that he had his g-tube placed. In the beginning it took an hour per feeding four times a day. He was in constant pain for three weeks after that surgery (and still recovering from the heart surgery). After a few weeks with the g-tube Chuck and I bought a portable DVD player for Apollo so he could watch movies on the couch (in our main living area) while he was fed.  We were horrified by our own actions. It went so against our parenting style. But we had a sick child with a heart defect and he was recovering from major surgery and had to sit still for an hour four times a day. We were just surviving.

Summer came and his health was declining…he had very little stamina and would just sit…we limited movies to feeding time but if we went for a walk or to a park or swimming, he would be wiped out for the rest of the day and just lie on the couch. He just didn’t have enough energy to be active. This is when I began questioning his cardiologist and trying to get to the bottom of his continued health issues.

Apollo had his second  heart surgery in Houston Texas October 30, 2012. Recovery involved, naturally, plenty of movies. We had gotten his feeding time down to approximately 15 minutes prior to this (imagine a toddler drinking sippy cup or bottle of formula). After his surgery he developed chylothorax and couldn’t  tolerate the special milk based formula. When we were discharged from the hospital we were back to hour-long feedings, this time with stomach cramping and vomiting. His ability to sit and watch a movie was a real blessing.

As soon as we were home (with permission from his doctor and under the direction of a dietician) we began blending food adding in the fats and oil he could tolerate along with vitamins, brewer’s yeast and probiotics. We put this through his tube instead of the special chylothorax formula and his vomiting stopped immediately.  Six weeks after surgery we began the process of adding normal fats back in. Apollo is now taking his soy based formula through his g-tube 2-3 times per day (down from four!) and it is back to only taking about 15 minutes per feeding. Once he started getting high fat formula again we noticed him perking up and feeling better. Now that he getting a large percentage of his calories though his high fat formula he is feeling better than he ever has. I think the soy formula has  much more staying power that the foods we were blending.

Now, two and a half months after his second heart surgery, he often goes days without asking to watch a movie. All on his own he has lost interest. He is feeling so good that he would rather be active and play then parked on the couch. And this change thrills me! I hated his daily movie watching. I do believe it is detrimental to a toddler’s brain development. But his heart defect was detrimental to his overall physical develpment. Nothing was ideal.

So there you have it. My children logged far more hours watching movies in 2012 than I would care to admit. But Apollo is now healthier than he’s ever been and he is becoming a much more typical active two-year old. I expect this trend to continue as long as his heath holds out. And I pray it holds out forever…