How to Create Your Own Unit Study: PNW Homeschool 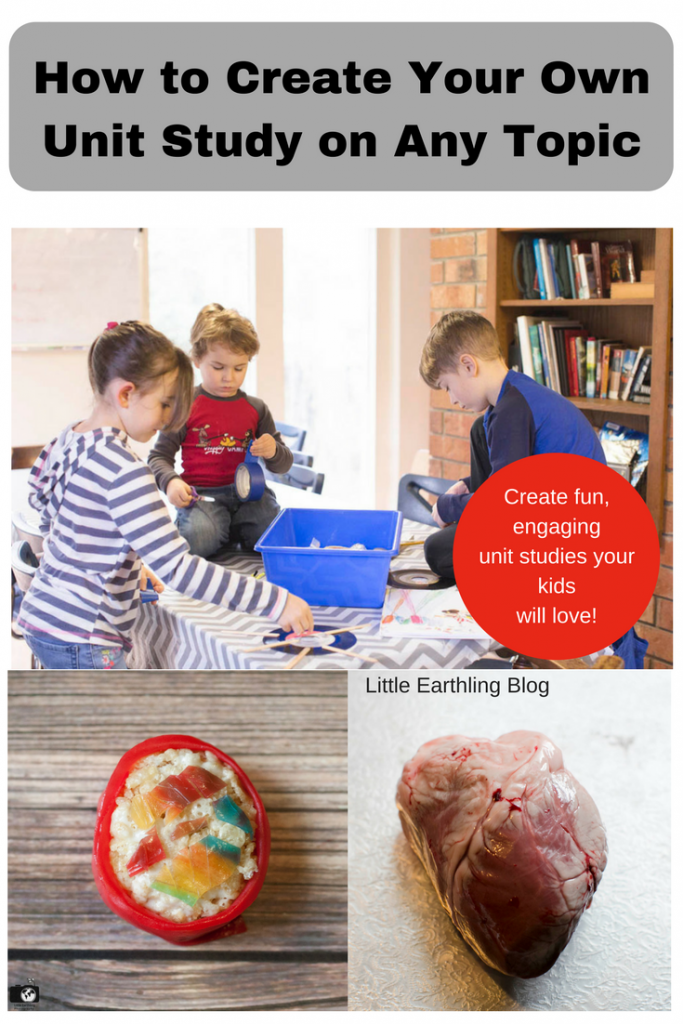 How to Create Your Own Unit Study

{Most photos in this post are before I went digital and are taken out of our photo albums, so please exuse the quality. 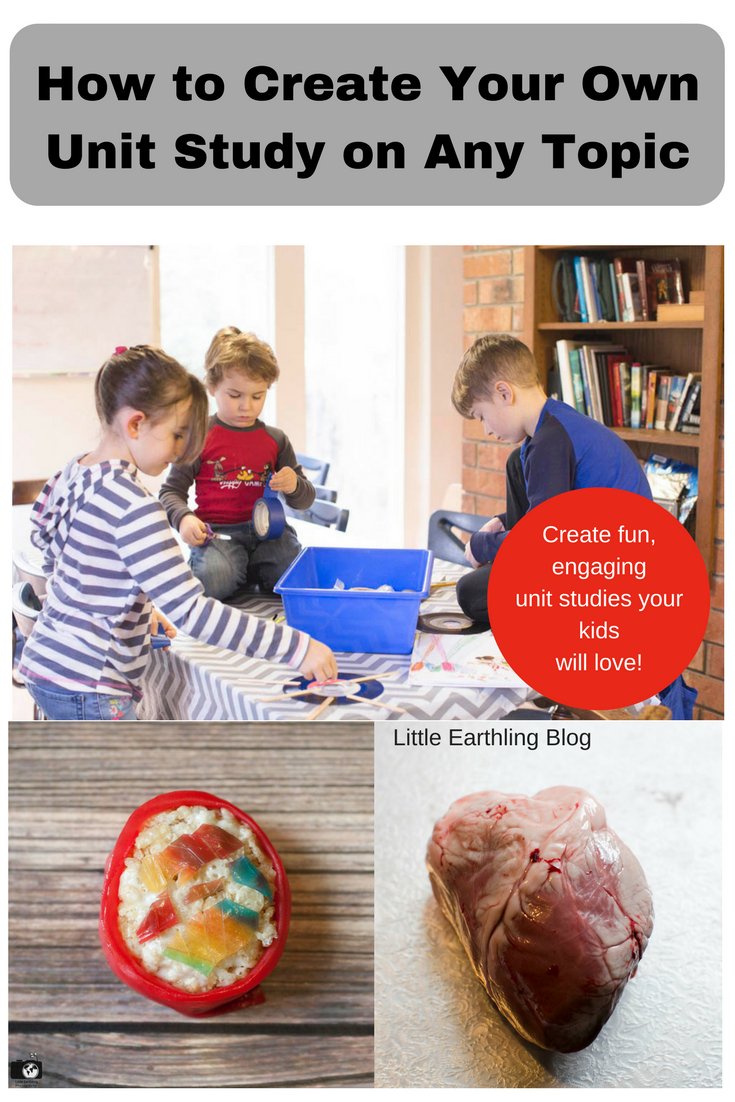 I have been homeschooling for 17 years and now that I have grown children (and college and university graduates at that) I feel like my time has come to encourage others in their homeschooling journey.

What Are Unit Studies?

Unit Studies was a bit of a catchphrase when we started homeschooling back in 2001. It was the grand notion that subjects could (and should) be taught together rather than divided into 45-minute boxes each with their own textbook, workbook, and tests. I knew I wasn’t cut out to homeschool by recreating school at home. In fact, I was homeschooling because Chuck and I didn’t want our children to have a traditional education. 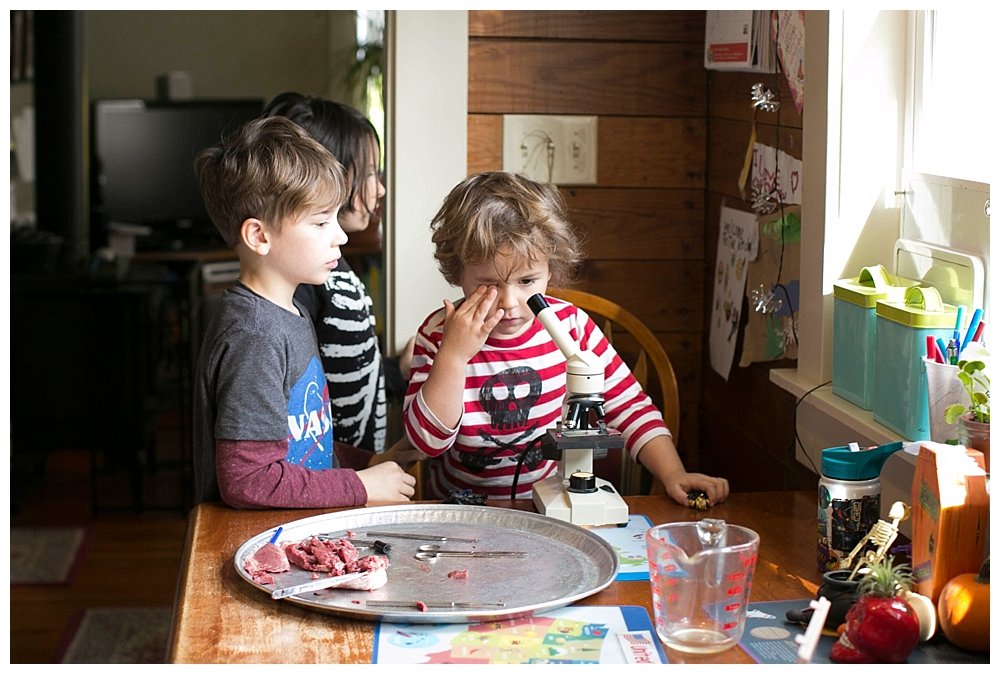 Why Create Your Own Unit Study?

Back in the day (you know, 2000 and 2001) the internet wasn’t what it is now so I perused catalogs. Over the years I have purchased a few unit studies but for the most part, these fell flat with my kids. Guess what? Sory problems aren’t more fun because you throw in facts about panda bears and grammar is still grammar even if your vocabulary words are all from Where the Red Fern Grows. So I quickly ditched those in favor of creating my own unit studies. 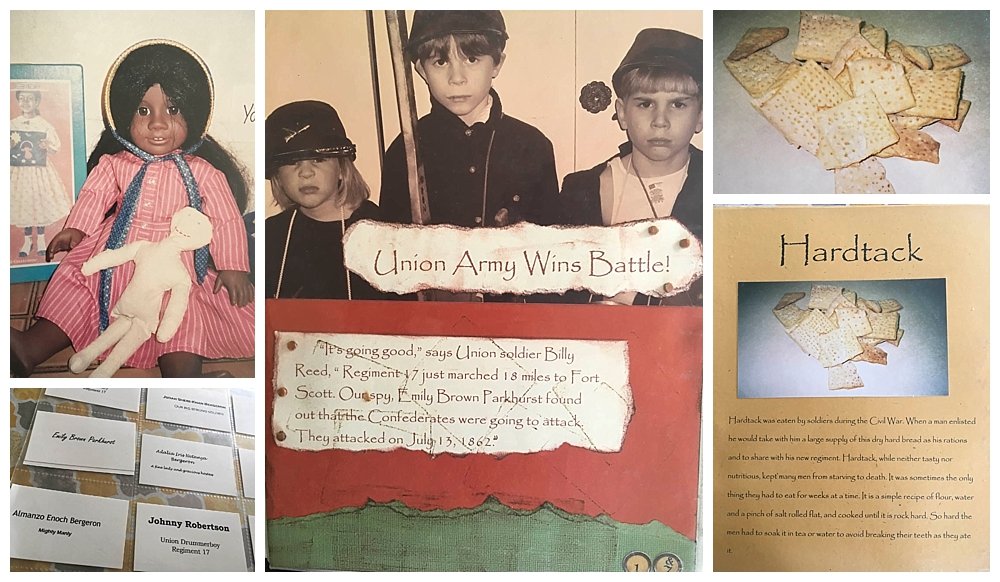 The first time we did what you could call a unit study was when we (at Judah’s request) dove straight into studying the Civil War. I had envisioned coming up with math problems, writing assignments, and art projects based on the Civil War. As it turned out, I didn’t really need to. We grabbed a few books from the library and my kids dove ahead full-speed.

We didn’t use a single workbook or textbook that year beyond basic math*.

First, we read a few books about the Civil War and then a few more. This led to locating states and cities on a map and eventually o making our own maps. The kids read about soldiers eating nothing but hardtack so tough soldiers had to dip it in tea so they wouldn’t break their teeth. 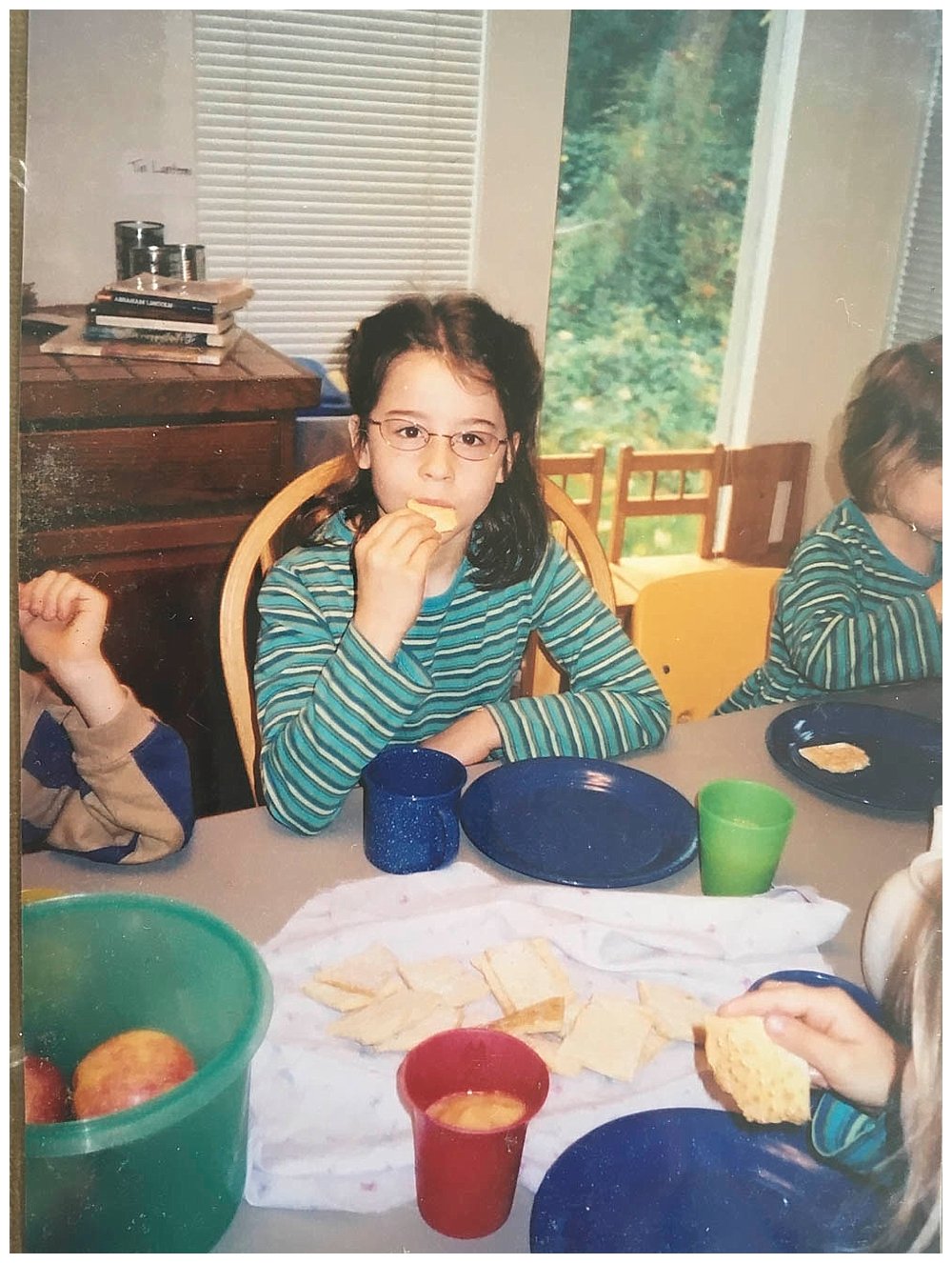 So we made hardtack and had it for lunch one day with tea. We bought the American Girl doll Addie and read all of her books. We sewed rag dolls and made yarn dolls as well. Calling cards were popular at that time in history so the kids each designed their own on the computer and we printed enough for them to trade.

We spent over a year studying the Civil War. There are literally hundreds of books on the topic. It was that unit study that made me realize I didn’t need to buy a pre-made unit study. In fact, my kids were are much more engaged in learning when we came up with our own. 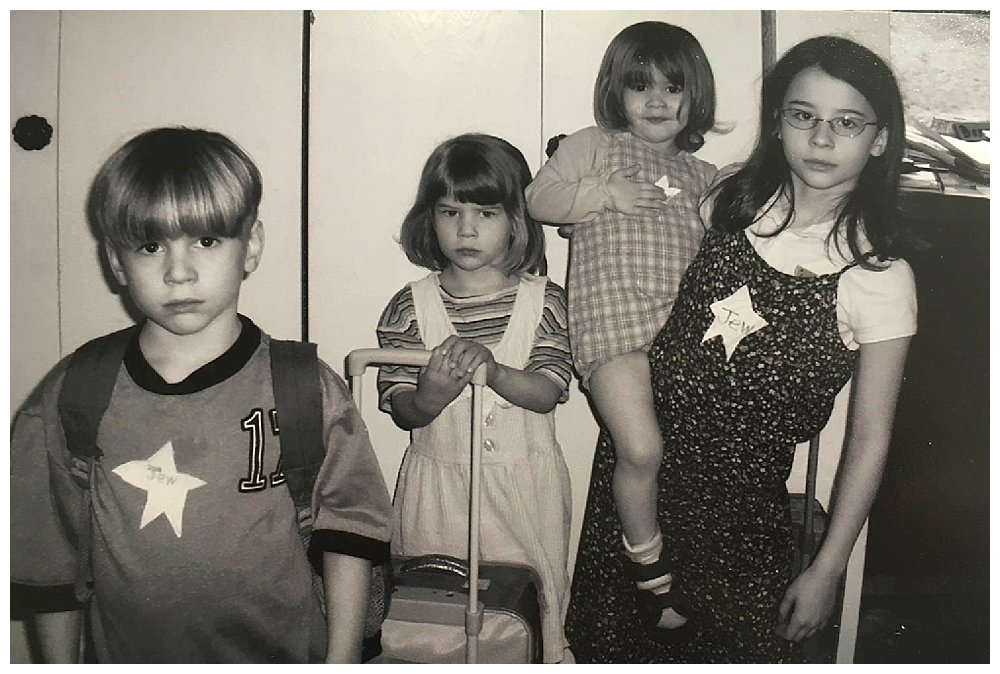 How to Create Your Own Unit Study

1. Decide on a topic

The topics I chose to create unit studies were almost always inspired by my children’s interests. The first one was the Civil War. Next, it was horses, then Japan, then Native Americans (to name a few). Right now (whether I like it or not) Apollo and I are deep in the thick of Greek Mythology. This is not a topic I would have chosen but it is what he loves right now so I’m going with it.

2. Go to the Library (or search Amazon) for Books

I frequently read a few books before introducing a new topic to my kids. This gives me an overview of the topic ahead of time. Most libraries allow you to search for and request books online. I have used this method for years. If you are worried about outrageous library fines read this post.

The internet now is a wealth of information! Blogs and websites are full of free or low-cost unit studies. Look to blogs for inspiration or better yet, look to your children. Type a topic they are interested in into Pinterest or just peruse the library until something looks interesting. I have a Homeschool Ideas board on Pinterest that I use to save ideas that I find interesting.

4. Brainstorm Ideas for Projects (or Just Let them Arise Naturally)

I’ll never forget the time during our Civil War unit study when, after making hardtack and peach pie, Adalia (about 8 at the time) said, “Mom, can we try tobacco?” She had knew this was a major crop in the South, but had no idea that tobacco is what cigarettes are made from. We all got a good laugh about that one!

In our homeschool, we have baked, tie-dyed, dissected, learned to sew, made molasses candy, made our own butter,  made and raced our own cars, and so much more. Most of our big (and small) project ideas come from books we read.

Keep a Record of What You Have Learned

The state of Washington doesn’t require homeschoolers to keep portfolios of our homeschooling but I love documenting my children as they grow. During each unit study, I kept a list of books we read and activities we did as well as pictures of the children. As you can see, I loved having the kids record their memories and things learning in their own handwriting. The kids still love looking at these scrapbooks! 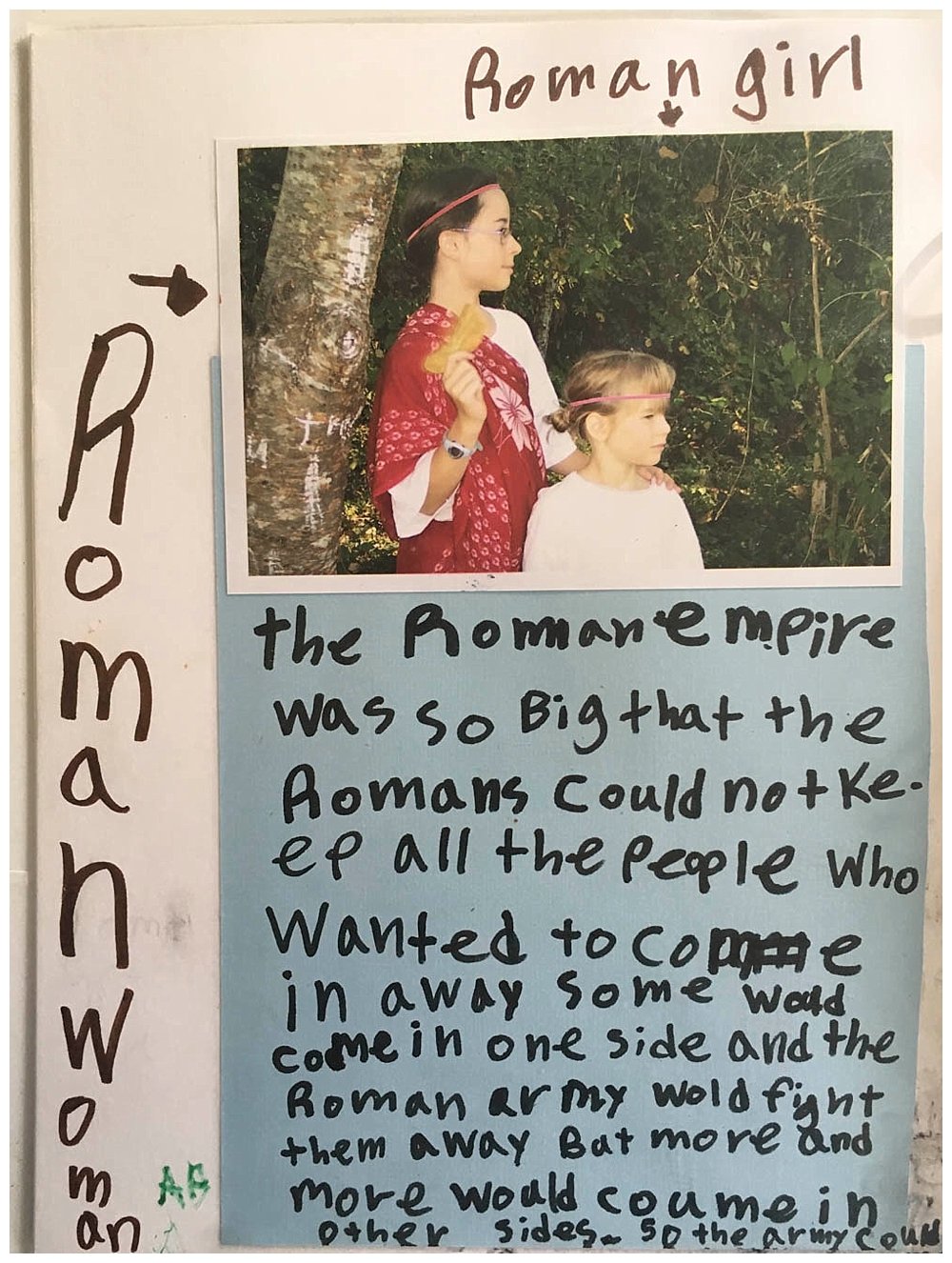 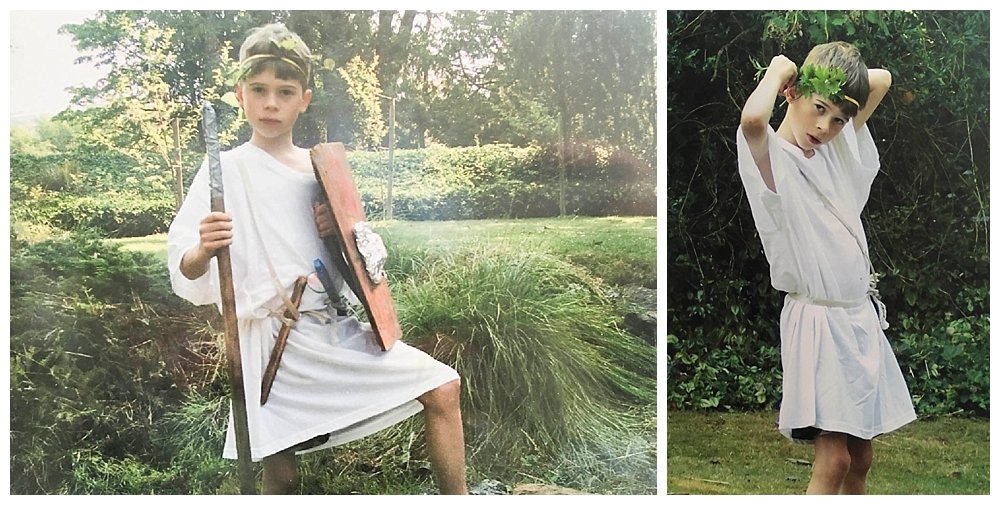 We did a unit study on Romans which led to Judah’s lasting-love with Greek and Roman myths. And now Apollo has followed in his footsteps and is just as obsessed.

We often celebrated the end of a unit study with party, skit, or celebration. This gave the children a sense of accomplishment, allowed them to show off what they had learned and was just a whole lot of fun. My parents and grandma loved coming and seeing what the kids had learned. Other times we had a party with friends where we made food or played games from a country we were studying. 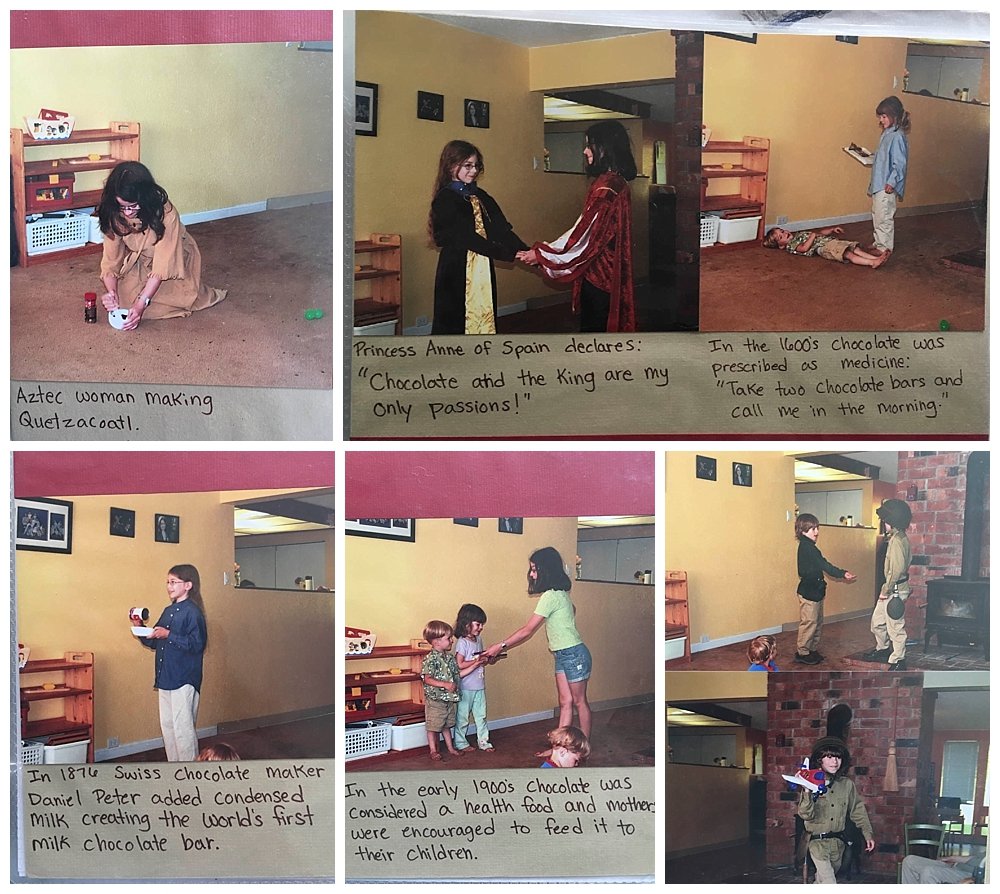 Another favorite unit study we did was on CHOCOLATE! We read about the history of chocolate (which covered both history and geography) and our study on chocolate culminated in a Chocolate Party where the kids performed a skit we wrote ourselves for their grandparents. The skit covered the entire history of chocolate…and as you can see from the photos our skit even had costume changes! 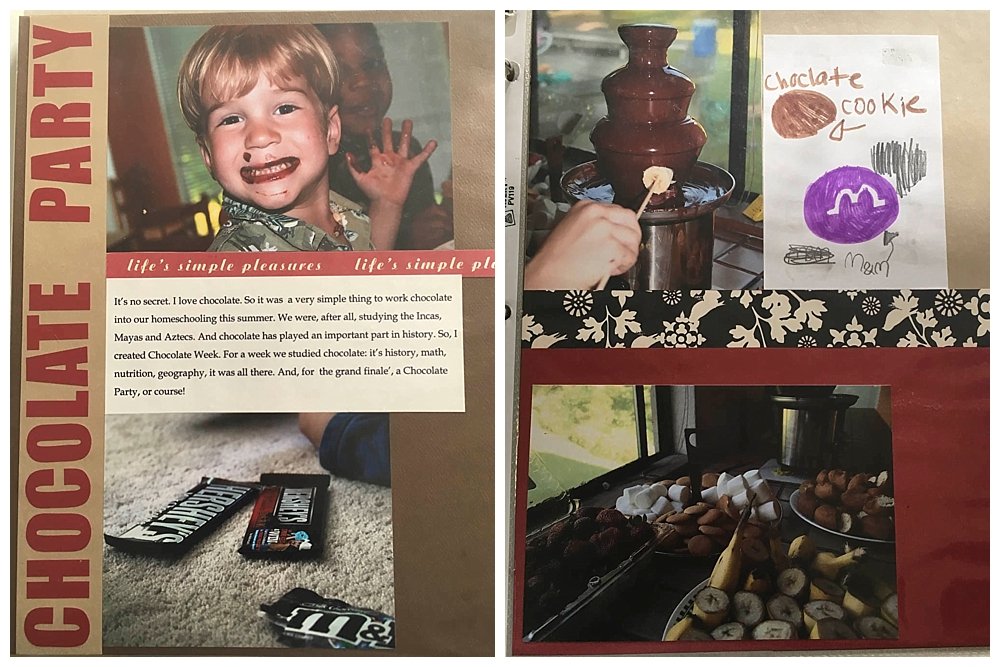 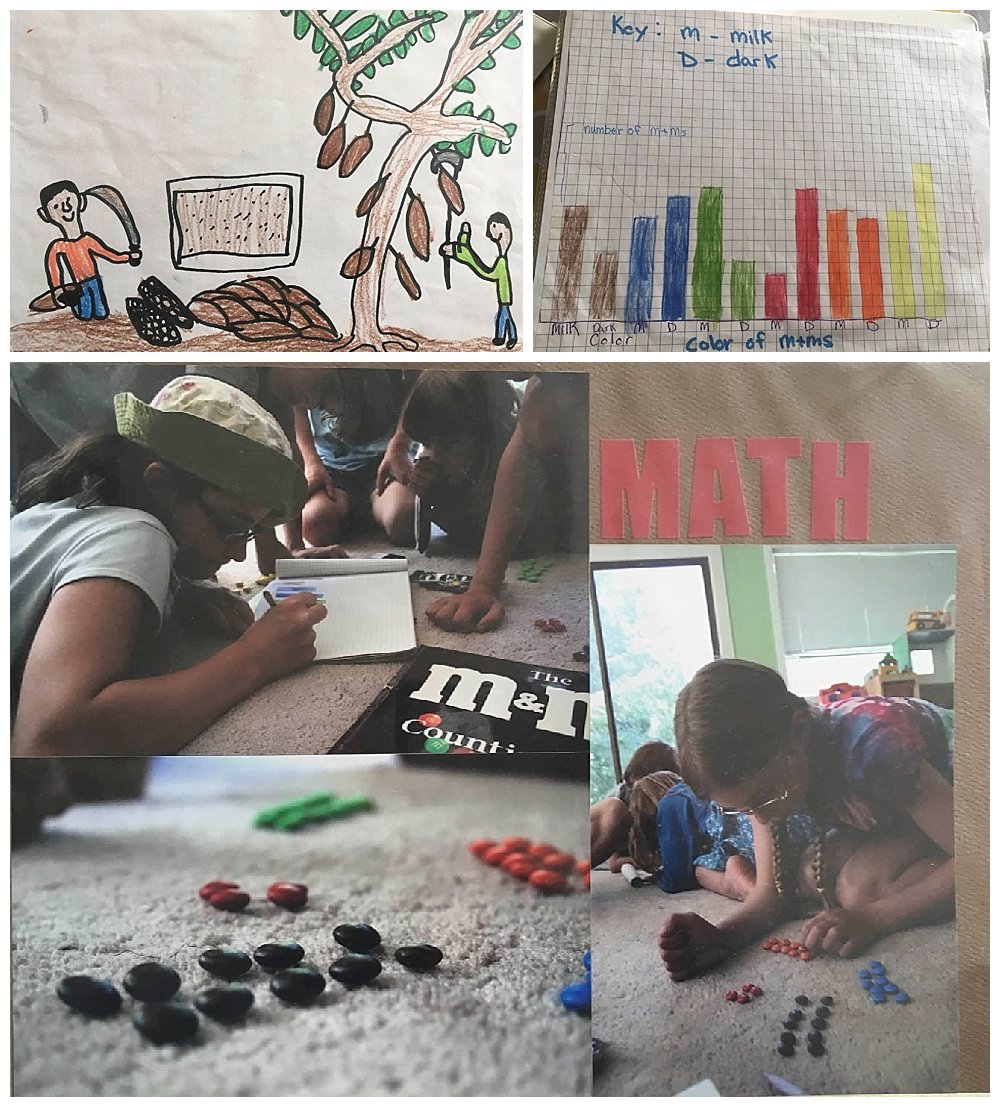 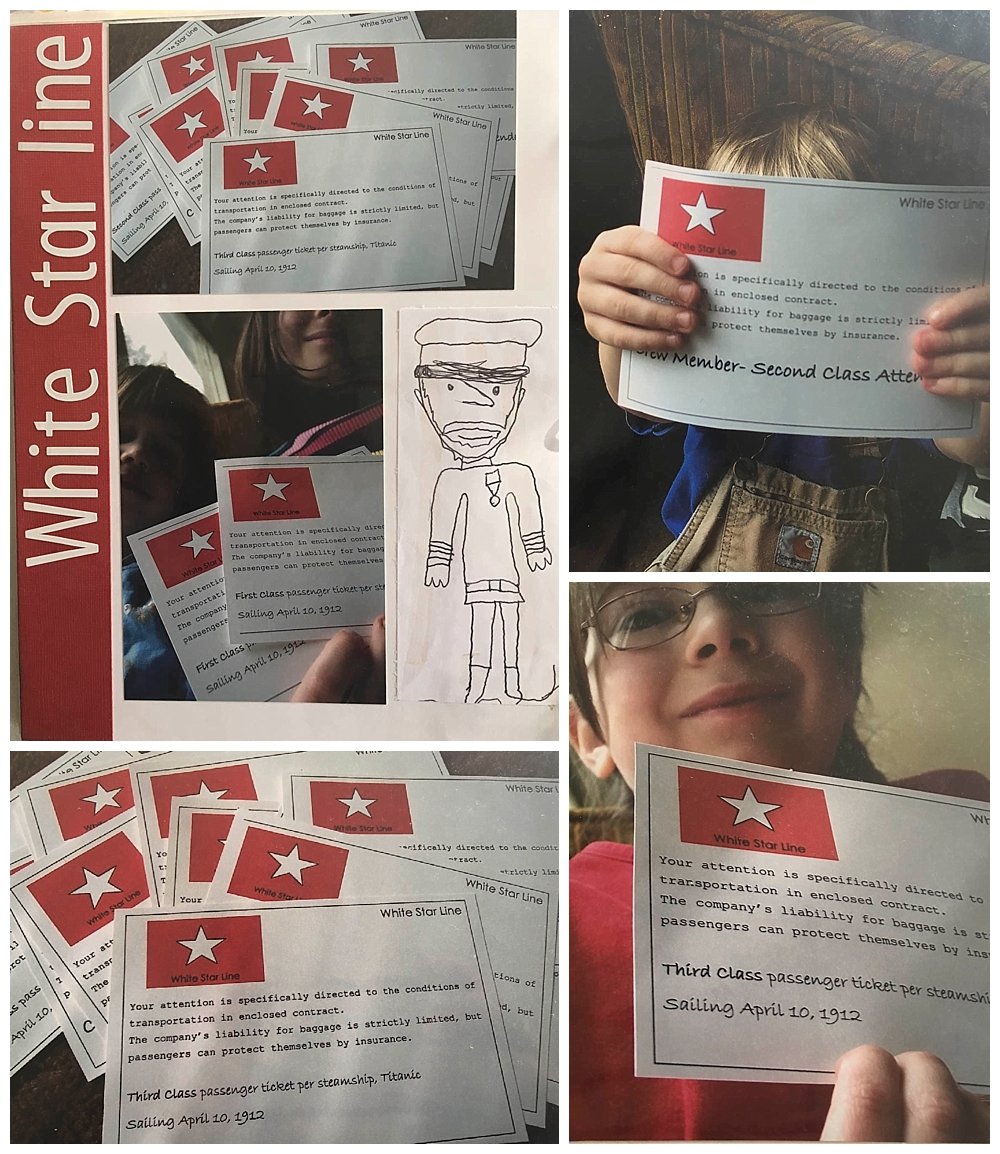 Another favorite was our Titanic Unit Study. After reading dozens of books about the Titanic and it’s well-known characters, we watched the movie (we skipped two classic scenes…you know which two) and went to a Titanic exhibit they had in Seattle.

Then we had Titanic Week where we did different activities every day. One day one the kids each drew a ticket with a name on it and that was their character for the week. I figured out exactly what percentage of people in our family would be crew, first class, second class, and third class and made the tickets accordingly. 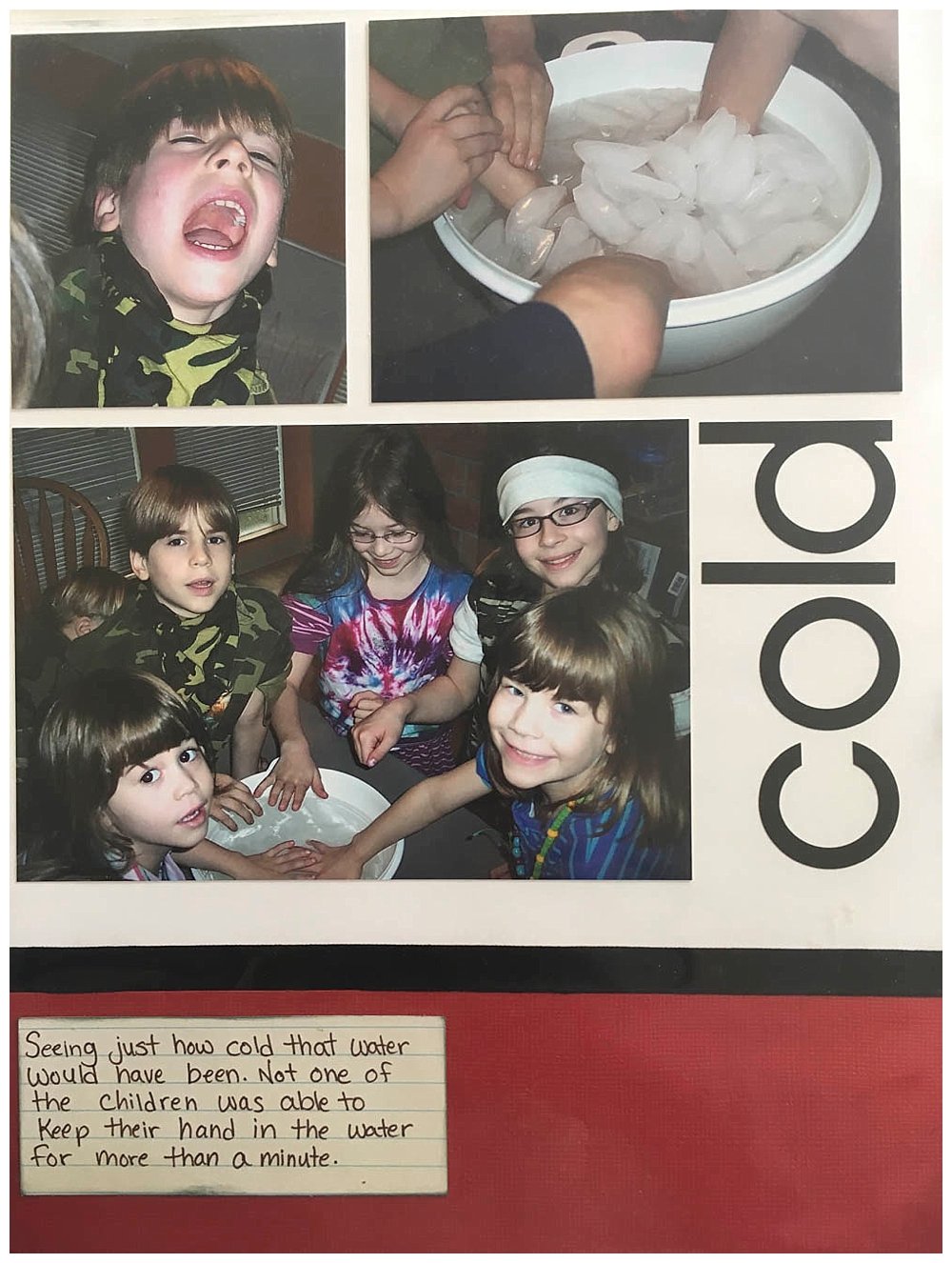 Each day was filled with different activities including this one where we had a chance to see just how cold the water was the night the Titanic sunk. 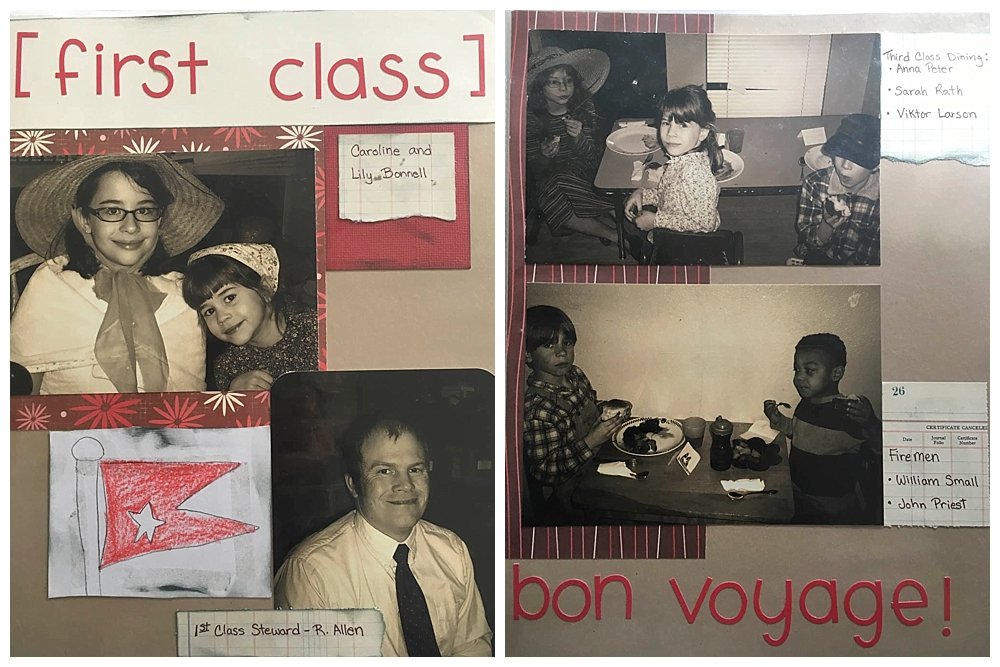 On the final night, we had a fancy Titanic-style dinner. We studied actual menus from the Titanic and made our menu accordingly. We invited our grandparents for this as well (they love being included in the children’s learning).

In keeping with our characters, the first place guests were served first, at our dining room table. The crew and third class were served last…at a small table in the living room.

Over the years we have studied, in-depth: the Civil War, Laura Ingalls and her life, the Titanic, Native Americans, Rainbows, Light, and Color,

Some studies have lasted a week, some months, some a year or more.

Be Confident in Your Teaching and Your Kids’ Ability to Learn

While we often wrote papers and created posters to go along with our learning, I never gave my kids tests at the end of our unit studies. I knew they had absorbed so much more information than if we had studied the topics more traditionally. Their work and enthusiasm proved that. As you can see in Tilly’s recent blog post, my kids learned plenty and have many happy memories if their homeschooling years.

Having Fun the Homeschool PE Way