It’s Okay to Not Be Okay: Dealing with Secondary Trauma 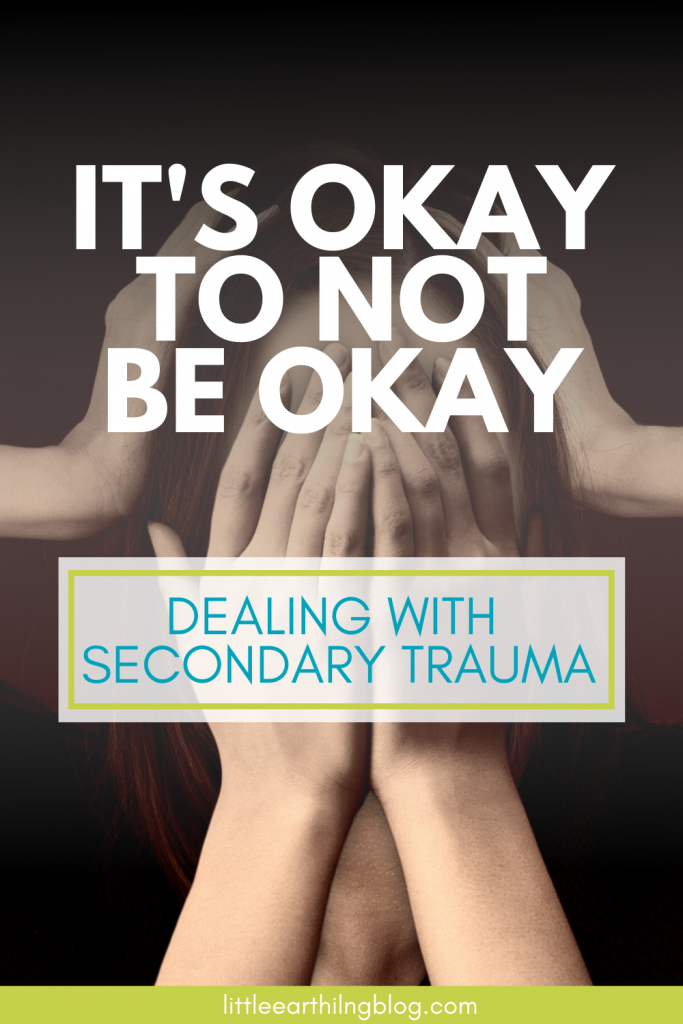 It’s Okay to Not Be Okay: Dealing with Secondary Trauma

I’m going to be real and honest here today. Secondary trauma isn’t funny or pretty, or easy to share. If you don’t want to hear it, if you only come to this blog to read about large family organization or that time my son begged to keep a dead mole as a pet that’s totally fine, you can skip this post. I am writing it because it is cathartic to me to write and I just happen to have a built-in audience.

When Trauma Becomes Part of Your Life

I think most people who know me in real life would describe me as calm, laid back, and probably funny. It takes a lot to ruffle my feathers. I have the God-given ability to stay calm in an emergency (even if I’m freaking out on the inside). I can manage the crisis and shed my tears later.

But here’s the deal. I have been living in a state of non-stop stress for years and I have come to the point where my mind and body can’t deal anymore. The stress began in 2011 when it became apparent to Chuck and myself that Apollo wasn’t just a fussy, unsettled baby, but that there was something much deeper going on. During repeated visits to doctors (and eventually the Children’s hospital) we were told over and over he was fine. Then we were told he had a milk allergy (there was no science or testing to ever back this up) and reflux. We were brushed off over and over until I eventually began to wonder whether or not I was imagining his health issues. Was I exaggerating them due to some deep-seated need for me to have a sick baby? This made no sense, of course, but neither did our repeated visits to doctors who told us our son was just fine.

Things came to head December 22, 2011, when Apollo choked so badly I had to have my 10-year-old son call 911 and talk to the dispatcher why I repeatedly performed the Heimlich maneuver on my toddler. That night of my life was so traumatic I never wrote about it in detail on my blog (though it is detailed in the book I am writing). After that night Chuck and determined that we would not stop calling the doctor until he ordered an MRI or referred him to a cardiologist.

On January 18, 2012, Apollo was diagnosed with a rare congenital heart defect, a double aortic arch. What should have been a quick, “non-invasive”, one-and-done surgery led us to a years-long roller coaster of surgeries, misinformation, and chaos for our family. As life would have it, just as Apollo’s health began to stabilize and things calmed down to bearable on the medical front, another son’s behavior began to escalate. I then had to coordinate visits to hospitals and specialists for Apollo with visits to psychiatrists, psychologists, and evaluations for our other son.

Our life changed. Our family changed. I changed. I was getting less crunchy by the day. I sold my cloth diapers. I bought frozen chicken nuggets. I put my kids in public school. And, of course, none of this happened in a vacuum. I still had a house full of healthy, typical kids. They went to college and got married and had appendixes rupture.

Our son with autism and FASD can no more control his behavior that Apollo could control his health issues. But you know what? Apollo’s heart defect doesn’t come with built-in judgment. No one has ever told me that I need to “get control” of Apollo’s heart defect. Nobody ever told Apollo he needed to get over it and learn to eat. No one has blamed Apollo, no one has blamed me. People have nothing but compassion for a curly-haired toddler hooked up to a feeding tube. A teen boy with autism and FASD? That’s a different story entirely. Everyone has a few words of “advice” on that topic…

What is Secondary Trauma?

Six years of non-stop stress have taken their toll on my body and mind. I am no longer the calm, laid back woman and mother I used to be. I feel like I am in a constant state of stress. If I am not dealing with an actual crisis I am anticipating the next one. I suffer from Secondary Trauma and I finally did something about it. I went to my doctor and told him I could no longer handle the stress in my life. I don’t ever feel calm any more. I go to bed feeling stressed, sleep poorly, and wake up feeling stressed. When a situation escalates, I have trouble coming back down to what used to be my “baseline”.

I don’t get time off. Chuck not only works long hours but he works out of town. This means 99% of parenting is on me. I didn’t get a break when I was in New Zeland last year. I was still fielding almost daily texts, messages, and emails to deal with crises from a world away. There is no rest for wicked they say and there is also no rest for this special needs mom.

{Let me interject, Chuck is an involved, active parent. However, working out of town means I am fielding all phone calls and emails and most meetings and appointments. I was dealing with the issues from New Zealand because I could check messages and respond to emails while Chuck was at work.}

I recently planned to go a walk, in the sunshine, with a friend I haven’t seen in months. After that, I was going to head to an autism support meeting (this would have been my first) and last week our church had a mom’s night out. Those are all things we call “self-care”. I missed every single one of those events due to escalated behavior. It seems the harder I try to work on a little “self-care” the less it works. And then I am even more frustrated because my plans were “ruined”.

At any rate, my doctor listened. He ran the appropriate blood tests. My fatigue is a frequent topic on this blog and I can now tell you with certainty that my thyroid, my iron levels, my everything is just fine. As you know I exercise regularly, I have started to take magnesium which is supposed to help with sleep. And now, I will add in meds for anxiety and depression. While I wouldn’t necessarily describe myself as “depressed” and I certainly don’t feel “sad” my doctor said, “I think your brain has just had enough and it’s taking a toll on your body”.

So here I am. Why am I taking the time to write this all out and share this with perfect strangers? Because, as I learned recently at Refresh, it’s okay to not be okay. And by sharing this, maybe someone else will realize that too.

You might also want to read The Stigma of Hidden Special Needs.