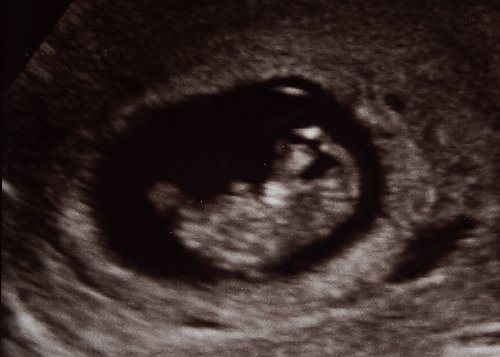 That’s what this baby feels like to me. My great creative work.

Now don’t read too much into that statement. I didn’t say this baby was my finale or encore. I said my magnum opus.

Adalia (13) was born nine months after we were married, and babies continued to arrive quite regularly at 12 and 17-month intervals for years. And now, after four years, a new baby. To say we are thrilled would be an understatement. To the say the children are excited just doesn’t even come close.

I know since it’s been four years since the last baby you’re wondering, was this a surprise?  The answer is yes, and no. Did I suspect I was pregnant immediately? No, so in that sense, it was a surprise. After four years, no diapers, no breastfeeding and sleeping all night, yes I was surprised. On the other hand, given our track record (eight babies in nine years) I would have been more surprised in the end if Tucker was our last baby.

The next question I’m sure is, did you plan this baby then? The simple, honest answer to that question is: the only babies we’ve ever planned were the two we adopted (Mordecai and Avi).

And that’s as detailed as I’ll get, given this is a public blog 🙂

Now onto the good stuff. It took a while for me to even suspect I was pregnant. With my other children, I was sick as a dog from day one. In fact, I was sick before enough time had passed for me to even take a pregnancy test. Sick as in, dizzy, nauseous, can’t get off the couch or I’ll puke, sick. This time I simply felt a little under the weather. Chuck is the one who convinced me to take the pregnancy test, which I finally did October 31. It was positive, of course.

Unfortunately, I had become rather lax on tracking my dates and had absolutely no idea how far along I was. Like no clue whatsoever. One month? Two? Three? I just didn’t know. So I decided to go in for an ultrasound, knowing that early in pregnancy they can date the baby almost to the day. That in itself became a problem when I realized I couldn’t actually make the needed phone call from my own home. We hadn’t told the children yet, so I could hardly call requesting an ultrasound to date my baby. Luckily, I was in and out of the doctor’s office with Kalina, but there I faced the same problem. I couldn’t explain my predicament to the doctor and ask for a referral with Kalina sitting there….in the end, it went like this:

Me: Can I get one more thing before I leave?

Me: I’m going to spell something and the reasons will become clear in a moment…I need an

The doctor at this point has raised his eyebrows in interest

Me: I haven’t been keeping track of my dates…and I have no idea….

Dr: Hmm….and I supose your EPT came out positive?

Dr: And who normally, ah, takes care of these things for you?

Me: Leslie (I was only willing to use her first name since Kalina was sitting right there), but she’s not, doing that, anymore.

And so the conversation went, in code. And I got my referral. I had the ultrasound on Jubilee’s birthday.

We decided to tell the children on Thanksgiving. We did the whole “say what you’re thankful for” making sure Chuck was the last one. When it came to him he said, “I’m thankful that Mama’s having a  new baby”. There were about five seconds of complete silence, then all the girls erupted in screams. They were shaking and crying and looking to each other saying,  can you believe it?! Our children have been asking/begging for a new baby pretty consistently this past year.

Adalia was only 9 when Tucker was born. Judah was 8 and Tilly, 7. They are the only three who have clear memories of Avi and Tucker joining our family. This time everyone is old enough to get in on the excitement. My children have already knit hats and sewn felt balls and blocks for this baby.

I think it’s safe to say this will be the most loved and adored baby ever.