Give the Gift of Banned Books to Someone You Love Today 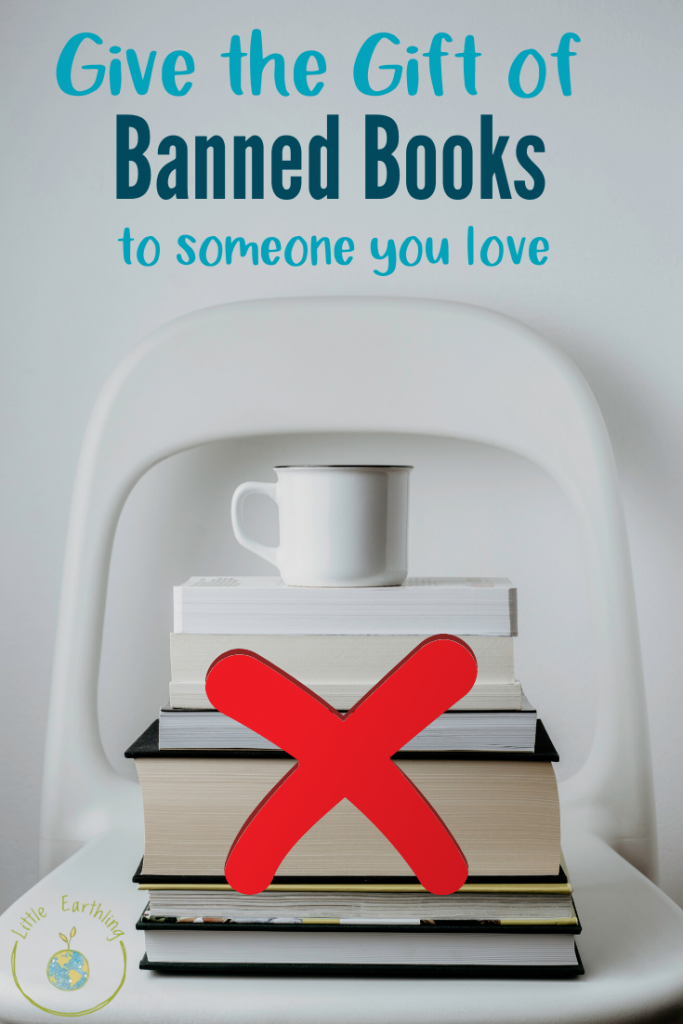 If you are anything like me then just the idea of banned books is enough to make you want to rush out and buy a few copies…for yourself and all of your friends. We are all avid readers in our house and during Banned Book Week this year, I was surprised to see how many books I love were banned at some point.

This book contains Amazon affiliate links. You have been warned.

To Kill a Mockingbird by Harper Lee

Have you read To Kill a Mockingbird? It is so well-written and a book every high school student or young adult should read, in my opinion. Especially now in 2019 with the question of consent coming up so frequently on social media and the court system.

According to Banned Books Week: “Harper Lee’s To Kill a Mockingbird has a long history with censorship. It holds the seventh slot in the American Library Association’s top ten most challenged and banned books list for 2017, and it also appeared on the 2009 and 2011 lists. It has been challenged for the depiction of violence, offensive language, and racism.“

Apparently, we can’t write historical fiction or memoirs if they include “violence, offensive language, and racism”. Well, my reading list just got a whole lot shorter.

One Flew Over the Cuckoo’s Nest by Ken Kesey

According to the LA Times, this book was banned because, “Some parents call it glorification of prostitution, murder, and obscenity. But educators, academic experts, and even other parents see it as a valuable teaching tool.”

Hmm…I read this book in high school, saw the play, and the movie starring Jack Nickelson. If we are calling it the “glorification” of prostitution, murder, and obscenity, then I think we should at least be fair and call it the “glorification of underfunded and understaffed mental institutions”. To each his own, I suppose.

According to Banned Library in 1968 “The New York State English Council’s Committee on Defenses Against Censorship surveyed English classrooms where it was identified as a “problem book” with the reason that “Orwell was a communist.”

If you’ve ever read the book, I think it is safe to assume that your eyes weren’t suddenly opened to the beauty of communism…after all, there is a reason it was banned in Russia in 1977 as well…

The Kite Runner by Khaled Hosseini

Chuck and I both read and enjoyed this book when it first came out. I’ll admit, this book can be hard to read (due to the disturbing content) but is so well written and tells an important story.

“The protagonist of The Kite Runner is Amir, the son of a wealthy businessman, who befriends Hassan, the son of one of his father’s servants, in 1970s Afghanistan. The story transitions in time between pre-revolution Afghanistan and the 1990s, when Amir, now a successful novelist in the United States, learns that Hassan and his wife have been killed by the Taliban. As Amir sets out to Kabul to rescue Hassan’s son Sohrab, he contends with the repercussions of his childhood betrayal of Hassan.”

This story has so much value as we try to balance what we believe with our actions. This book is thought-provoking and moving and I am certainly glad to have read it.

This book is one of the top 10 challenged books according to the American Library Association.

The Picture of Dorian Gray by Oscar Wilde

Apparently this book, written in 1890 and is full of sexual content that I somehow didn’t notice…

According to WC Banned Books “Immediately after publication, the book was banned in every single English speaking country (Europe and America with a few others), without exception. And then later in 1930 after it was stolen and then translated into Arabic. The bannings were because the countries felt that the book had explicit sexual content.”

Bridge to Terabithia by Katherine Paterson

According to Banned Books Brigade, “The primary reason this book typically faces opposition, particularly in schools, is because death is an essential and pivotal part of the plot. Additionally, Jess’s frequent usage of the word “lord” outside of prayer and occasional offensive language have contributed to various school challenges.”

I was totally shocked to find out this was not only on the banned book list but was one of the American Library Association’s most challenged books for the decade 1990-1999…Heaven forbid our kids learn that death happens…and is, in fact, a part of life itself. This is such a powerful coming of age book.

The Outsiders by S. E. Hinton

The Outsiders is an amazing classic that was banned for its portrayal of violence and poverty, and gangs. This is a classic that I am sure most of you have read. The book delves deep into the effects of poverty and trauma along with the heavy consequences that come from our choices.

I think Neatorama puts it best with “Fahrenheit 451 is an entire novel about the future and the banning (and burning) of books. It was banned, ironically, because one of the books that eventually gets banned and burned is the Bible. Drawn your own conclusions, my (hopefully) intelligent readers.”

Gone with the Wind by Margaret Mitchell

I just posted about this book on my Facebook page. I haven’t read it in years (but I just purchased the kindle version and can’t wait to dive in). This book was banned for all the reasons you would expect…the use of the “n” word, the portrayal of slaves and white slave owners.

According to Thought Co, Margaret Mitchell wrote, “If Gone With the Wind has a theme it is that of survival. What makes some people come through catastrophes and others, apparently just as able, strong, and brave, go under? It happens in every upheaval. Some people survive; others don’t. What qualities are in those who fight their way through triumphantly that are lacking in those that go under? I only know that survivors used to call that quality ‘gumption.’ So I wrote about people who had gumption and people who didn’t.”

Mitchell’s book (much like Shakespeare’s works) is full of love, hate, greed, complicated relationships, and ambiguous motives. As Mitchell said, during adversity, some survive and come out stronger and others collapse. We discover our true character when we are faced with adversity.

Check out my Amazon Storefront for even more banned books you’ll love!

What is your favorite Banned Book? How many have you read?