{All photos taken with my iPhone} 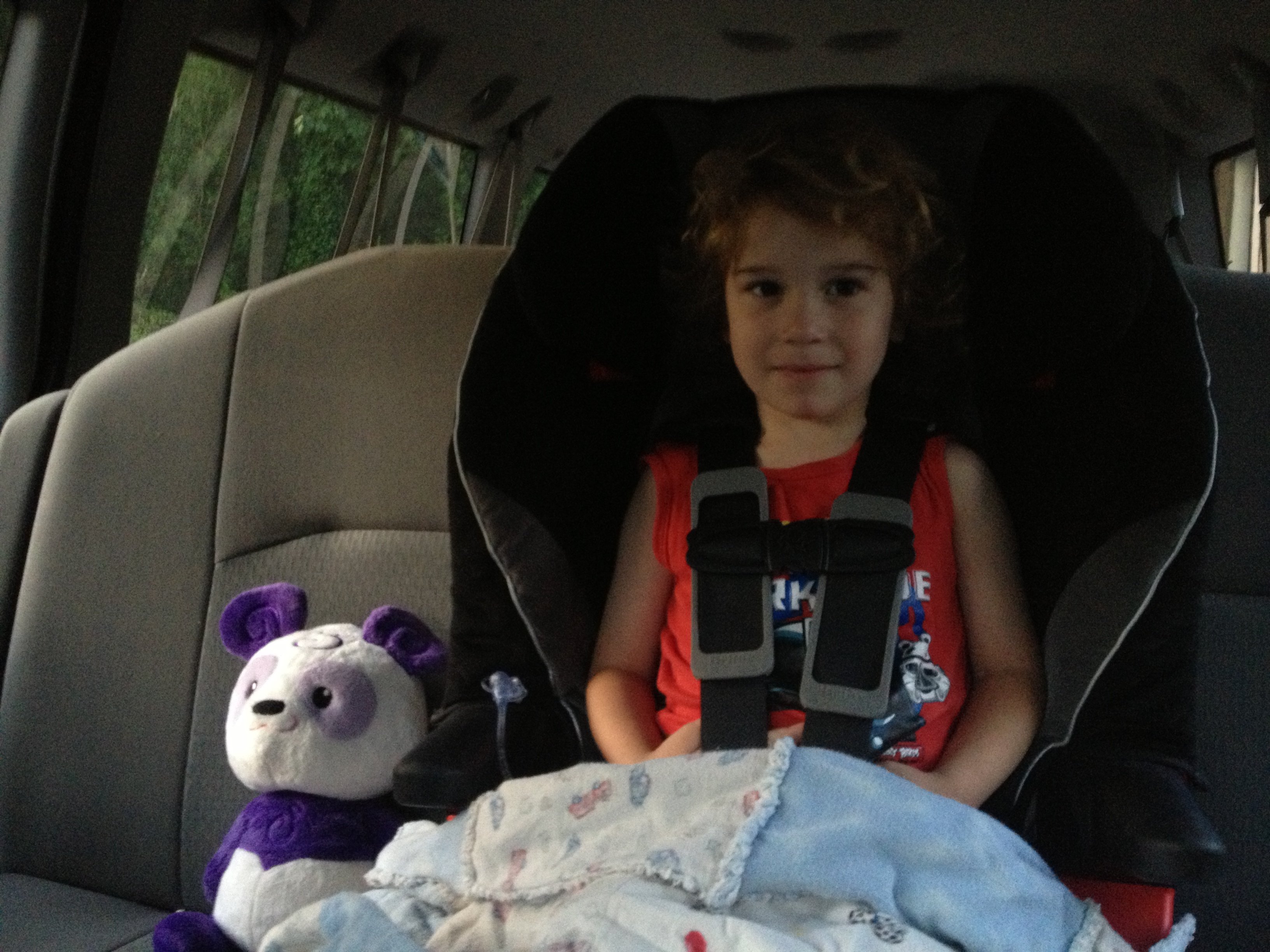 Thursday Apollo had an appointment with at Seattle Children’s Hospital to see his cardiologist and get an ECHO of his heart due to his new symptoms that have developed this summer. He has been very tired, not gaining weight, complaining of chest pain and has a new murmur.

Unfortunately, before we even left Bellingham, Apollo said he needed to throw up. Kalina had been up the previous night vomiting, but Apollo just throws up sometimes. It kind of comes with the territory of his feeding issues. He spit into container a bit, but didn’t actually vomit…until we hooked him up to his feeding pump. Hoping this was just an isolated incident, we unhooked him and kept driving south. By the time we reached Seattle it was clear he was sick. We stopped at a store only about five minutes from the hospital where Chuck ran in for emergency supplies while I called the hospital to tell them about Apollo. They have a very strict policy about bringing sick kids in for clinic visits (ironic, huh?) so I was sure they were going to tell us to come another day.

Instead, I was told to leave Apollo in the van with Chuck, go register him and have the registration desk call back to the nurses. They eventually decided to keep his appointment because his vomiting was not accompanied by a fever. Everyone who came in contact with him donned their isolation precaution gowns and gloves and Apollo wore a toddler sized mask.

{And by the way, I am totally fine with the hospital’s policy on sick kids. I know what it is like to see a kids coughing with a runny nose and being terrified Apollo is going to get sick from them.}

The conclusion is, he has not one but two new heart murmurs, neither of which are concerning and his ECHO came out perfect.  He had a full blood workup recently, which came back perfect as well. His cardiologist believes his symptoms are respiratory rather than stemming from his heart. This is good news, but still leaves us with a  three-year old who cannot maintain his weight without his g-tube and who is still tired much of the time. I don’t like the idea of his current symptoms being caused by a narrow airway, because that means things are getting worse, not better. Next up is an appointment with his pulmonologist. We are waiting for a call from the hospital for that. 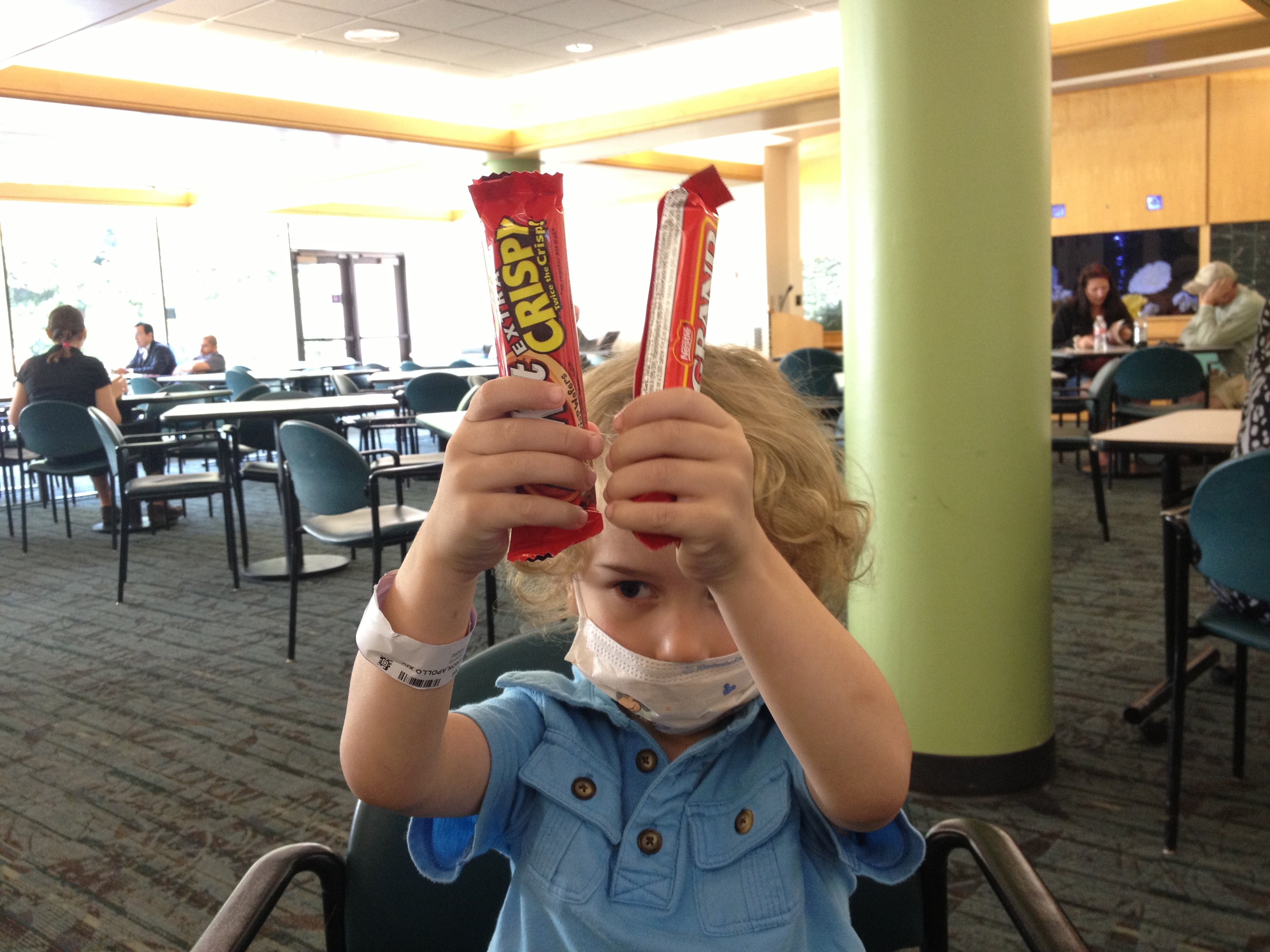 Apollo isn’t scheduled for any follow-up on his heart, which is frustrating. In March 2012 we were told his heart was repaired and after a visit or two he wouldn’t need follow-up. Then in August as the cardiologist described the complications from his first double aortic arch division we were told he would need to be followed closely for the rest of his life. Now, no follow-up? I guess because we got it repaired in Texas? It is just so confusing when you never get the same answer twice.

Apollo, thankfully, didn’t vomit in the hospital at all. He fell asleep before his ECHO, then awoke and enjoyed watching Mickey Mouse on the TV while his ECHO was taking place. He was having so much fun in fact, he wasn’t happy when it was over. He was sent for a chest x-ray (just to rule out any issues from his chylothorax) and then we headed to the vending machines where he picked out these two candy bars. Hey, if you had just traveled a hundred miles with a vomiting, crying toddler, you might just buy him two candy bars to make him happy too… 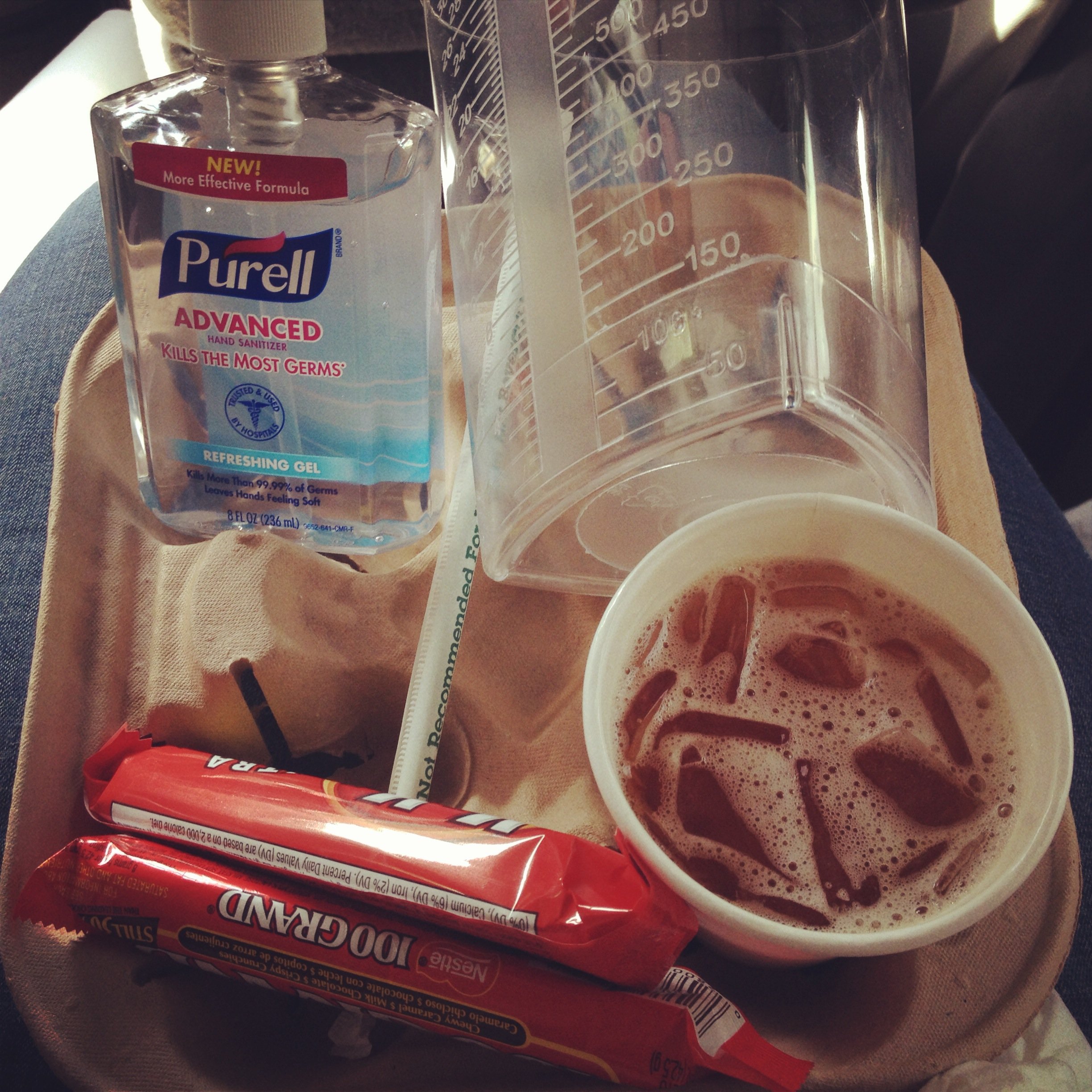 Before we even pulled out of the hospital parking lot, Apollo’s vomiting started again. I sat in the back with my vomit station set up. Not pictured are the: garbage bags, baby wipes, paper towels and soiled clothing. Thankfully, he fell asleep and slept the rest of the way home. By afternoon he was fine.

And by that night, several more of us were sick.