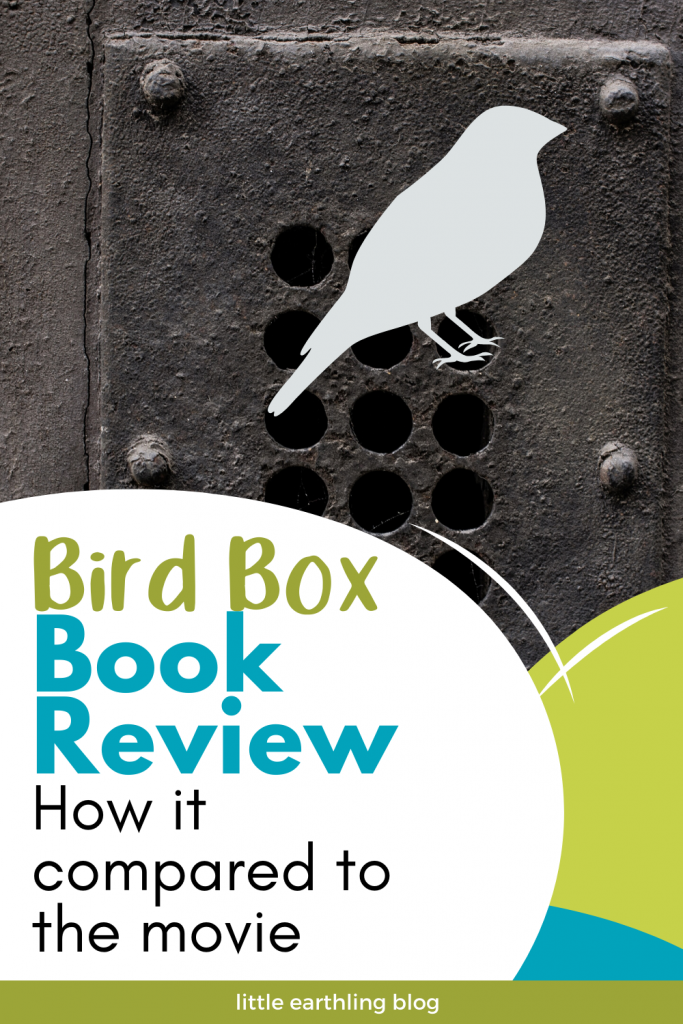 Bird Box by Josh Malerman was published in 2014 and is Malerman’s debut novel.

From the back of the book:

Something terrifying that must not be seen. One glimpse and a person is driven to deadly violence. No one knows what it is or where it came from.

Five years after it began, a handful of scattered survivors remain, including Malorie and her two young children. Living in an abandoned house near the river, she has dreamed of fleeing to a place where they might be safe. Now, that the boy and girl are four, it is time to go. But the journey ahead will be terrifying: twenty miles downriver in a rowboat—blindfolded—with nothing to rely on but her wits and the children’s trained ears. One wrong choice and they will die. And something is following them. But is it man, animal, or monster?

“Engulfed in darkness, surrounded by sounds both familiar and frightening, Malorie embarks on a harrowing odyssey—a trip that takes her into an unseen world and back into the past, to the companions who once saved her. Under the guidance of the stalwart Tom, a motley group of strangers banded together against the unseen terror, creating order from the chaos. But when supplies ran low, they were forced to venture outside—and confront the ultimate question: in a world gone mad, who can really be trusted?“

Bird Box switches between the present and flashbacks, telling the story the leads up to the treacherous river journey. This book was a page-turner that kept me engaged from the beginning to the end.

I did not like to movie Bird Box at all. The only reason I read the book is that I knew there was a slight difference in the ending and I was just curious enough about it to give the book a try and I am so glad I did.

The main character Malorie was hard to like in the movie. She was rude, crass, mean to her sister. She was an eccentric, isolated, artist with a chip on her shoulder.

She wasn’t happy about her pregnancy. Fine, it was unplanned, I get that, I really do. But she refused to plan or prepare for the baby in any way. She was in complete denial that she carried a human life would one day join her.

Malorie’s Relationships Are Different in the Book

Even after her baby, and Olympia’s baby are born, Malorie seems angry and resentful in the book. Yes, I realize these were life and death stakes, but it was hard to watch her intimidate and scare her children without the balance of love and affection.

In the book, Malorie carefully trains the children from infancy to use their ears, not their eyes. Because it is a book, not a movie, we get to her Malorie’s thoughts. We know how she loves her children but doubts her parenting. She has good days and bad days. She tries to raise her children without fear while preparing them for the worst. We see her strength as wakes up every morning as a truly single mom.

In the book, from the day the babies are born, she is trying to find a way “out” for them. A better life. She has to make incredibly difficult decisions on a daily basis. I don’t want to give anything away, I just want you to know that whether you loved or hated the movie (or haven’t even watched it) the book is worth reading.

I was excited to see that the sequel, Malorie, will be coming out in July. I am looking forward to reading that as well.

Have you read Bird Box or seen the movie? What did you think?

You might also enjoy How to Read More Books in 2020.

The Adventures of Pan and Apollo