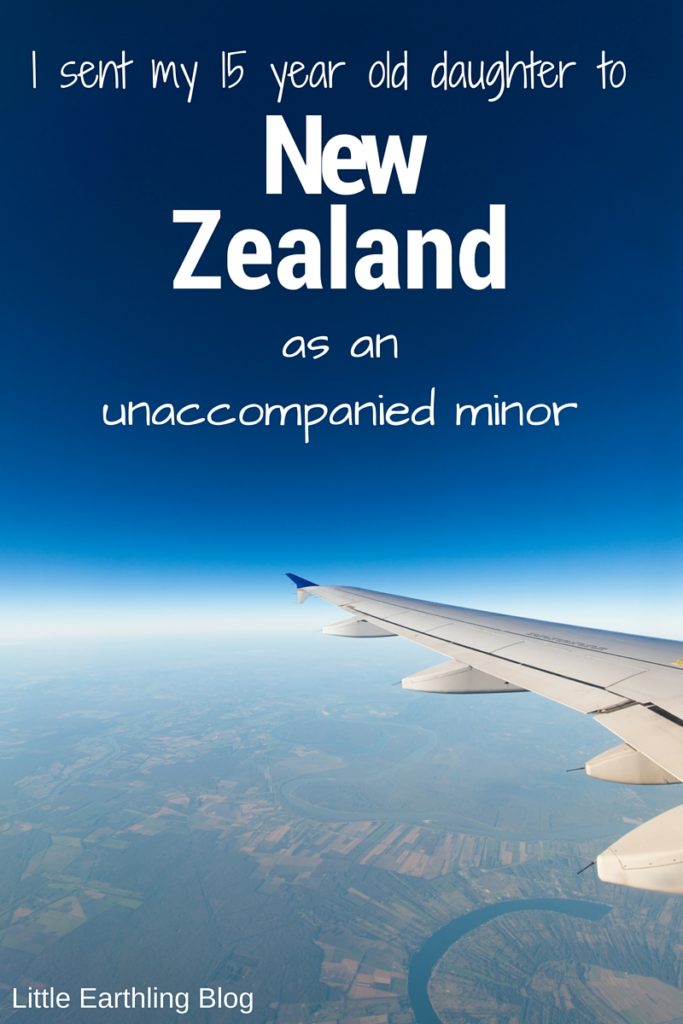 When Adalia first called and asked me to send 15 year old Kalina to New Zealand for a visit, my initial answer was…No Way. New Zealand is, quite literally, half a world away. I’ve watched Taken and Red Eye. Send my beautiful teen daughter on a plane alone?

Then Adalia responded and told me she could travel as an unaccompanied minor. I had no idea they even did that for international fights. After a little bit of research, we decided to take the plunge. Here are a few things we did to make sure she was as safe as possible.

1.We didn’t tell people she was going.

A few friends and family knew she was traveling to New Zealand, but that’s all. Even then, aside from our parents, I didn’t tell people what dates she was traveling. We kept it vague on purpose.  I asked all of Ben’s family to feel free to post on social media while she was there, but no posts referring to her traveling home (such as, “saying goodbye to Kalina at the airport”). Obviously,  I didn’t want people to know she was traveling alone.

We paid around $100 for her to be an unaccompanied minor. Strangely enough, it was perfectly legal for us to put her on a plane, at age 15, and let her travel to New Zealand alone. CRAZY! We chose to pay the extra fee for her to have unaccompanied minor status. This meant we handed her over to the airline staff and they were in charge of her until they handed her off to Adalia in New Zealand. She was given a wrist band with a sensor that they scanned at each checkpoint. I got regular text updates on her…when she boarded the plane, when she landed, when she had met up with Adalia, etc. They were very thorough and it felt quite secure. They wouldn’t hand her off to Adalia until they had checked her ID to verify her identiy. Once she was handed over, we got our final text.

Kalina has read Protecting the Gift and we talk a lot about keeping safe and staying safe. We knew as an unaccompanied minor that she would be monitored the entire time from leaving our arms to reaching Adalia’s.

All in all, it felt very safe and secure. I worried very little about her and she had the time of her life in New Zealand. Ben and Adalia (not to mention Ben’s family) made it a priority to spoil her. We paid for her plane ticket and they paid for all of her adventures.

We made sure Kalina had a direct flight. She flew from Vancouver, BC directly to Auckland. This cost us a little extra money and was inconvenient (we had to cross a border just to get her on the plane) but felt like this lessened any risk significantly. There was no way she could get lost or miss a flight.

Here’s what Kalina had to say:

My favorite part was definitely surfing. And just hanging out with Adalia, we went dress shopping, got our nails done, just sat around the house… we stayed up talking all night too. The plane ride there was miserable, but I was too excited to care. On the way back I had a whole row to myself, and managed to seep most of the time. When I left home, it was like 8 at night and when I got to New Zealand it was super early in the morning, and the flight was 14 hours. Then somehow, I wasn’t tired at all, and we hung out all day, got Gelato and played tennis, jumped off a cliff… and then the next morning, when I woke up I checked the time, and it was nine. I was like “Wow! I slept in!” and then I realized it was American time… so really it was super early. When we actually added it up, I had gone like thirty-eight hours without sleep… I was super exhausted the second day, but I ended up going to work with Ben. We rode horses on the ranch where Lord of the Rings was filmed.

All in all, she had the time of her life. Her days were packed with adventure and girl time with Adalia. We have no regrets about sending her and would do it in the future with another child. Next summer she will be headed off with Teen Missions, but she is already a seasoned world traveler.

Would you ever consider sending your child as an unaccompanied minor? At what age and how far away?

And Then They Were Married {Ben and Adalia}

The Kiwi Baby Has Arrived!