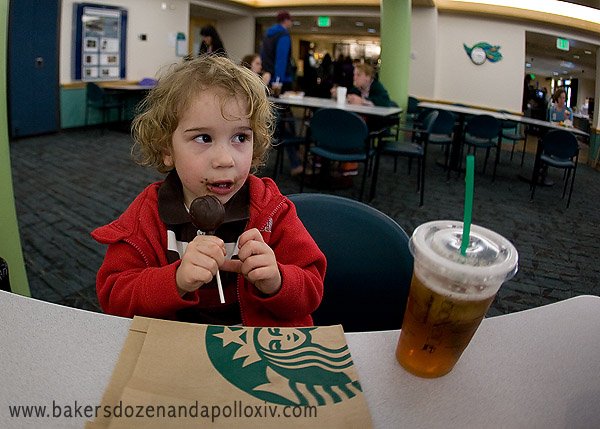 Yesterday we headed out for yet another appointment at Seattle Children’s Hospital. Because the hospital is a hundred miles from our house, we have to leave early to account for traffic, etc, so we often arrive early. And arriving early often means a trip to one of the hospital’s two Starbucks. 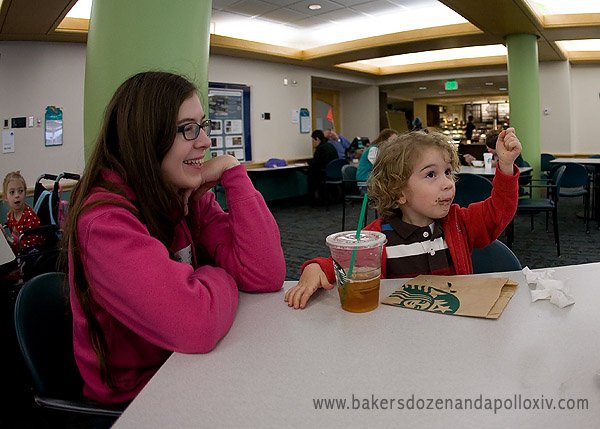 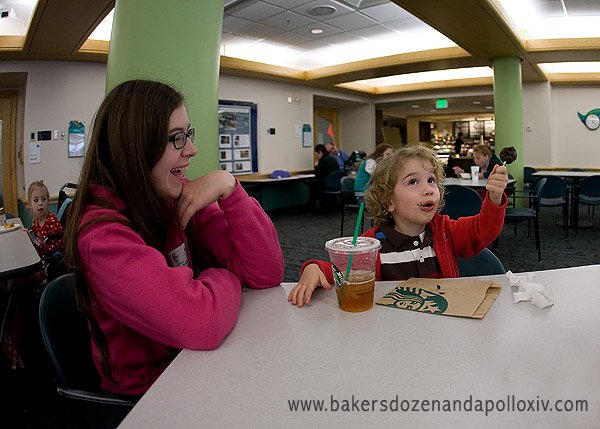 …and then falling down… 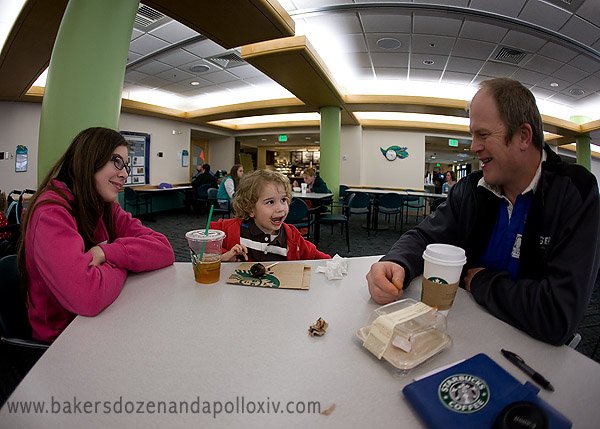 …and how Daddy would catch him and he would be safe. 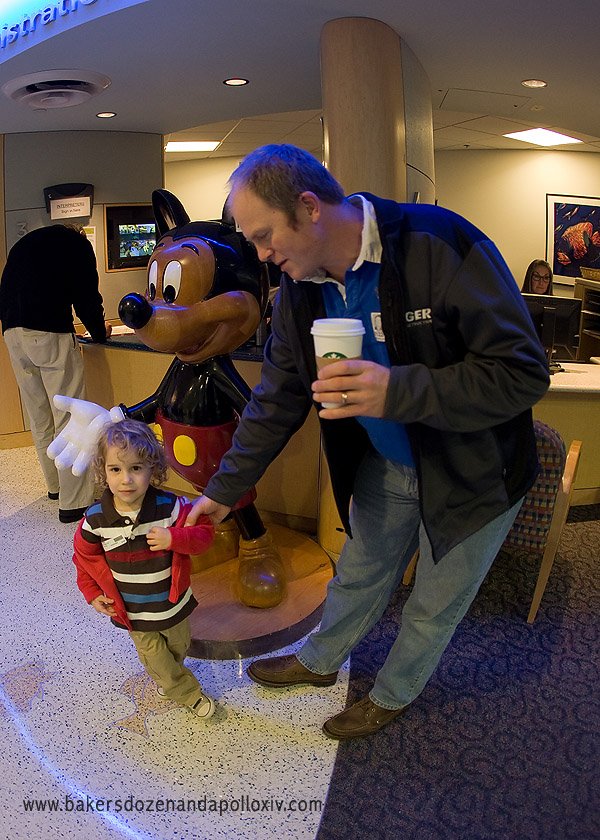 While we waited Apollo asked  Daddy to  take him to see “Monkey Mouse”. 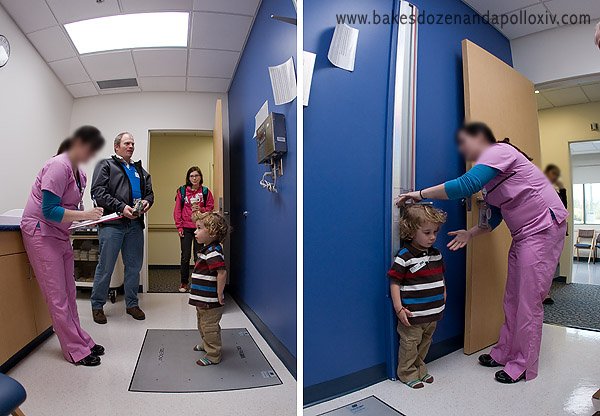 I cannot believe how big Apollo is getting! He’s gone from being stripped naked and lying on the baby scale, to being too scared to stand on the big scale alone, to doing it like an old pro! And he’s growing…growing, growing, growing. 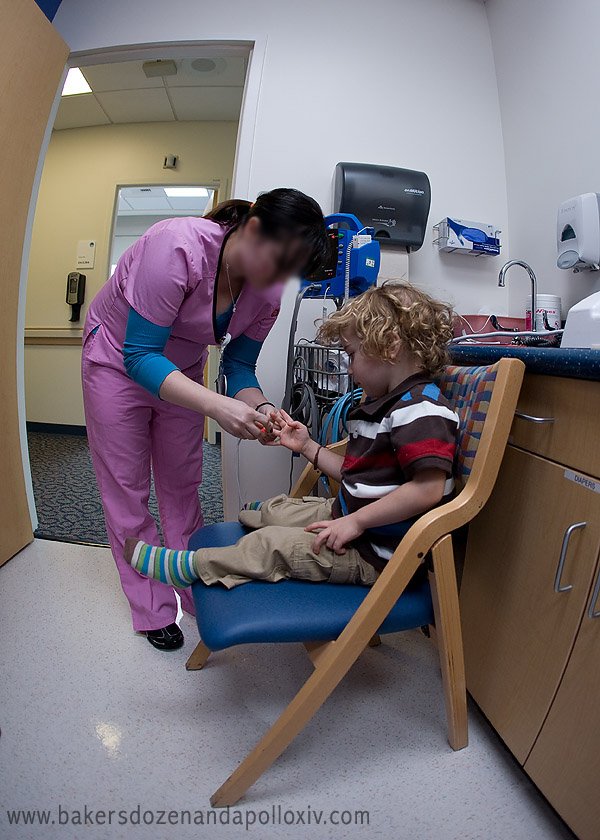 And now to the nitty-gritty of our visit.

But let me preface it with this: Apollo will never have a “normal” trachea or airway. He won’t have a “normal” airway because it didn’t develop normally in the first place. As a fetus, when his heart formed, his double aortic arch wrapped around his developing trachea, therefore his trachea has never been “normal”.

With that out of the way, let me say that Apollo’s pulmonologist, Dr. R, was thrilled with his breathing yesterday! The good news is he is much better since his re-operation at Texas Children’s Hospital. Dr. M, really did perform the miracle we were hoping for.

Here in an excerpt I wrote from his visit that day. The entire, detailed entry, is here.

“This time, unfortunately, he was not happy. He said he heard a lot of noise still when Apollo breathes it and it is not what he expects to hear post-double aortic arch division. He kept mentioning the possibility of an underdeveloped airway. Not at all what we want to hear…. He most emphatically told us he  thinks we should seek a re-operation for Apollo in another state. “Don’t mess around with this. This kid’s had enough things that are screwy with his case already. Find someone who knows how to fix it and have it done sooner rather than later”.

Quite a change from what we heard yesterday! Dr. R wasn’t thrilled that he does still retract when he breathes and it is visible from across the room- in part because Apollo is so thin. He also said that he still has a really long inspiratory phase when he breathes, but he is so much better than before the re-operation!

We asked what we could expect in the future. Unfortunately, there is no way to predict which kids have on-going airway issues that affect their daily lives, and those who recover so well they aren’t affected. He said he is “very hopeful” that Apollo’s airway will grow and develop. When he is five or six they will start doing lung function tests (he is too young for them now).  For now, we keep him healthy and keep him growing.

As far as the g-tube, his pulmonlogist said he will need caloric supplementation for long time. Very likely longer than he even needs the g-tube. The thing is, when a person has to work hard to breathe, they burn extra calories. Therefore, eating what a healthy two-year old would eat, isn’t enough for Apollo to grow.

Yesterday’s visit gave us the best news we’ve ever had about Apollo’s breathing. He is healthier and doing better than he even has in his life. In fact, he currently has no appointments scheduled at Seattle Children’s hospital. None.

Thank you so much for your prayers and support as we continue this journey.