Attack of the Wasps and an Update on Apollo 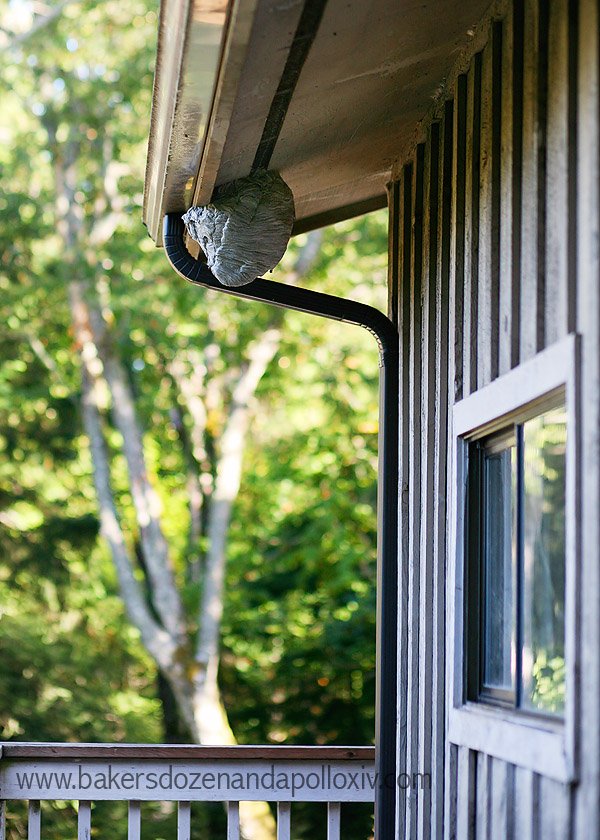 The other day as we headed out of the house to run some errands, I suddenly remembered I had forgotten my phone. I asked Judah to run in and get it. His running, it seems, disturbed a nest of hornets or wasps that had taken up residence on our back deck. Enoch yelled, “It’s bees!” and I looked over in time to see Judah doing the very distinct getting-stung-by-something-nasty dance. Into the van he hopped, just as a huge welt began to swell up on his temple. I only got a few yards before he yelled out. He had unknowingly transported another of the creatures into the van- it had hitched a ride on the inside of his sleeve. Ouch. With a little encouragement we managed to let the critter out and get on with our day. When we got home I took this photo. Unfortunately, it doesn’t give you a good idea of its size. This thing is huge– bigger than a basketball and we had no idea it was there before this week.

I received a call from Texas Children’s Hospital this morning. There is a surgeon there who would like to see Apollo. He’s not sure that Apollo’s case is even operable, but wants to have his CT scan and Upper GI redone since Apollo’s are five months old. Our cardiologist  recommended not redoing any test here since he was sure the new surgeons would want them done at their facility anyway. This makes total sense to us, which is why we are sort of at a standstill with Apollo.

The doctor in Texas would like us to fly down the week of October 22, re-do some tests, evaluate him, talk with us, and if he believes he can help, do surgery the following week. We like this situation better than the doctor in Boston who already has a surgical plan in place. I mean, I’m sure they’d redo tests and evaluate him before they moved forward but having heart surgery done for a second time, we’re much more cautious this time. We didn’t meet the surgeon who did Apollo’s surgery until 24 hours before it was done. We were a bit uncomfortable with this, but it is and was all so new to us. Perhaps that’s standard procedure, I still don’t know. We’re a bit wiser and more cautious this  time around. And Apollo’s case is much more complicated.

Here’s a little something you may not know, I know we didn’t before we were thrust into the world of congenital heart defects…a cardiologist is the doctor who oversees your child’s heart, but it is a cardiothoracic surgeon who actually operates. This may seem unimportant to you, but I tell you to help you understand it can be complicated when you are talking to your cardiologist about your child’s heart, then to the cardiothoracic surgeon who is doing the surgery, and may have a slightly different take on things.

I specifically asked whether or not this doctor, Dr. M, had re-done a surgery like this. The woman from Texas insisted to me he had- after stressing how very rare it is to have to re-operate. Chuck and I both like that this surgeon seems to be more cautious than the one in Boston.

A possible hang up here is, Texas Children’s Hospital doesn’t take our insurance. Apollo’s case manager has assured us this isn’t necessarily a problem- that can make a deal with the hospital and doctor on a case-by-case basis. The problem is, she’s out of her office until Monday and I am supposed to call Texas back tomorrow. We’re just not sure how soon we should jump into this.

Tomorrow we are scheduled to talk to a cardiothoracic surgeon at Seattle Children’s Hospital. We hope to get a better understanding of what his take on Apollo’s heart is.

As always, thoughts and prayers are always welcome!