Why I Hate Halloween 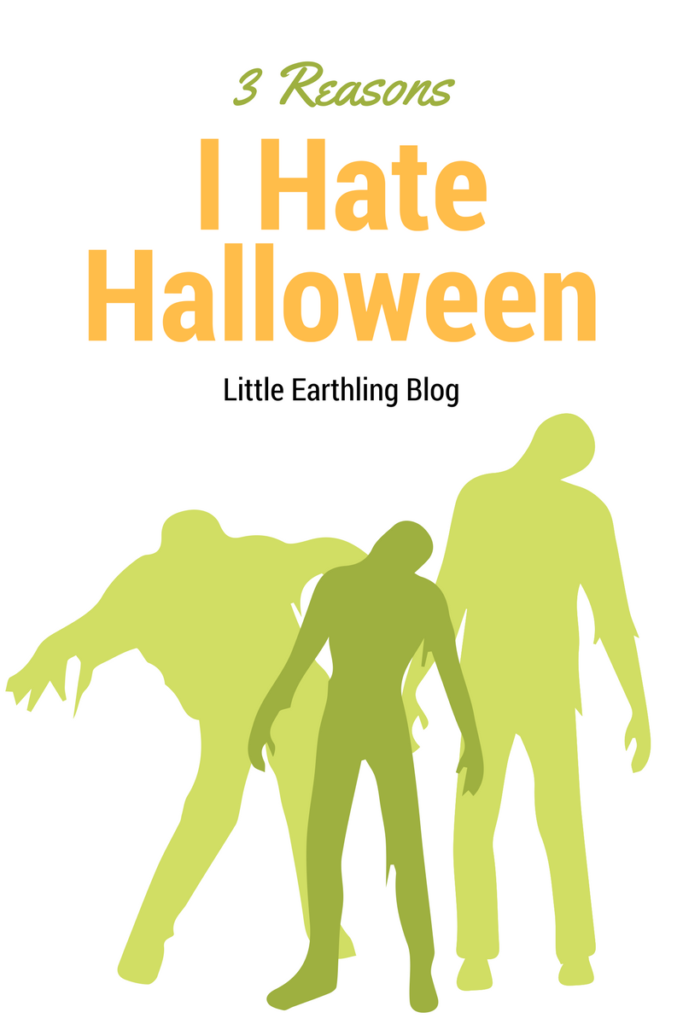 I’m going to just come right out and say it.

I know, I know, some people love it. Some people look forward to it all year. It is some people’s favorite holiday. Me? I just want it over (kind of like this year’s election). I do not think Trick or Treating is a sin. I don’t think it is evil or morally wrong. I don’t want to sap your joy, but I really just hate Halloween.

1.The Glorification of Death

I hate the celebration and glorification of death. Yes, I realize this isn’t everyone, but this aspect of Halloween is impossible to ignore. Grocery stores, office buildings, and people’s yards are full of Halloween decorations. If I wanted to avoid it all I would have to  stay locked in my house the entire month of October.

Back in 1998 Adalia was 2 1/2. We lived in Canada and I vividly remember being in the grocery on Halloween. An employee had on a scary (and realistic looking) mask. One of those stretched out Screaming in Agony Demonic-Looking masks. Adalia caught sight of it and was absolutely terrified. She became hysterical.  And 2 1/2 there was no way to explain to her that it wasn’t real. She could see the person moving, of course, it was real.

Five years ago it still scared my kids to drive by yard displays with graveyards, ghosts, and witches. My kids can’t be the only ones afraid of this stuff…

2. I Was Raised in an Evangelical Home During the Satanic Panic of the 80’s

It doesn’t help anything that I was raised in the 80’s in an Evangelical home at the height of Satanic Ritual Abuse scare. Everything was satanic back then (including Trick or Treating).  I vividly remember being in third grade where stickers collections and sticker books were all the rage. My friends and I compared and swapped and dreamed about stickers. Puffy stickers, scratch and sniff, and best of all? Iridescent stickers. I somehow came to possess four iridescent stickers. These stickers had unicorns (what third-grade girl doesn’t love unicorns?) and two out of the four had (wait for it) unicorns under a rainbow. My mom learned that “a unicorn under a rainbow” was a very specific satanic symbol and told me I had to get rid of my stickers. I can remember sitting in class and trying to peel those stubborn stickers off of the front of my notebook. My friends watched, aghast. Shocked that I would ruin those coveted stickers…

While I personally find no harm in images of unicorns under rainbows, the way we are raised has a strong effect on how we parent our own children. Just as I cannot bring myself to say the word for passing gas that starts with an F (it was forbidden in my home growing up) nor can I feel okay with the whole Halloween thing.

Every single year in the days following Halloween I see post after post by parents wanting to know what to do with all the darn candy their offspring had accumulated. I was shocked the first time I saw this. Wait, people take their kids door to door to Trick or Treat, allow them to gather sacks full of candy, then within days are trying to get rid of it? The frugal side of me is having a full-blown panic attack just thinking about the waste. It just makes no sense to me! Why let your kids joyously collect candy aren’t going to let them eat?

When we lived in Canada they actually canceled school the day after Halloween. I guess they learned from experience that kids who stay up late gorging themselves on candy have a hard time settling down for school the next morning…Who knew?

October 31st, 2012 Apollo was in the Cardiac ICU at Texas Children’s Hospital recovering from  heart surgery. Adalia called to let us know some friends wanted to take the kids Trick or Treating. Let me let you in on a little secret…when you toddler is in the CICU, you don’t really care what  your other kids are doing. As long as it wasn’t illegal or immoral, we were just happy to have friends helping to care for our children.

Since the kids started school and now realize they are missing out on Trick or Treating (though for us it would require a card ride to someone else’s neighborhood) we have watched a movie and eaten candy on Halloween night. This year we will be attending a local church’s event on Halloween.

We are not trying to make a statement, stand up against evil or change anyone’s mind (though I’m happy to skip the candy gorging bit). I just don’t like Halloween and I’m okay with admitting that.

Do you celebrate Halloween? How does what you do now compare to what you did growing up?